The new government led by Sher Bahadur Deuba has decided to withdraw a previous decision made by his predecessor KP Sharma Oli-led government to recommend 11 people for Nepal’s ambassadors to various countries.

A cabinet meeting held on Friday made the decision, according to a minister.

Oli was in a plan to appoint them after 45 days of the recommendation in the absence of the Parliamentary Hearing Special Committee after the dissolution of the House of Representatives. In the same way, he had appointed various officials in constitutional bodies, keeping the country’s repute at stake.

The law on parliamentary hearing has it that any appointment subject to the hearing can be endorsed if the hearing panel does not give a concrete decision in 45 days. But, the Oli government had misinterpreted it to mean that the appointments can be made after the period even when the hearing committee did not exist there.

But, with the Supreme Court reinstating the House, Deuba became the prime minister and rejected the decision of the ambassadors whereas the hearing committee has also been already revived.

It has been learned that the Ministry of Foreign Affairs had already sent letters to the concerned countries seeking agréments in the names so that the appointment could be made as soon as the 45 days would be over. 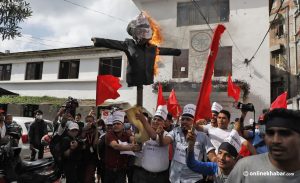