In his childhood, Saila Shakya, a resident of Guital, Lalitpur, used to travel from one baha (courtyard in Nepal bhasa) to another around the entire Kathmandu valley around this time every year. This 84-year-old still wishes to do the same even today, but could not do so this year, not only because of his age.

Whereas Bahidya Swowanegu (a tradition of observing images of deities exhibited in different courtyards in the city) used to be an exciting celebration during this time in the past years, only a few have been observing it at a small scale around their own neighbourhood this year due to the Covid-19 crisis. Yet, local priests and devotees say they have not left the tradition to die out despite the challenges.

For ages, the annual festival that celebrates the artistic and culture-rich history of local civilisation is being marked with fervour and fanfare.

What is the tradition about?

Shakya says that this old tradition is a part of the month-long Gunlaa festival that falls in the ninth month of the Newa calendar. For him, the tradition is not just about “exhibiting” Bahidyas (deity/ies of a courtyard), it is also about the other deities and idols including Dipankar Buddha, Aryalokeshwor, Manjushree et cetera, paubhas (traditional paintings), holy scriptures, and the history as well as the tradition that is related to the respective courtyards. Each year, the courtyards proudly exhibit them for people to look at.

The main day of the month when the festival is observed is Gaijatra, the 16th day of the month. However, it is not restricted to the day. People can visit the bahas and bihars as long as they are exhibited. It is a communal activity so people from all bahas also go visit other bahas. While doing so, they start from the closest bihars to theirs and always travel clockwise (from right).

Swasti Ratna Shakya, the priest of Keshchandra Mahabihar at Itumbahal, explains many bahas (courtyards) and bihars (monasteries) were created to boost civilisation from the time the civilisation started in the Kathmandu valley and during the time when Newa kings and scholars were prominent. “The tradition of going from bihars to bihars started from the time when the civilisation started from the hills around the valley. From there, Buddhist monks came here and created bihars. People started going there, on foot, which took a month and more. That tradition is being practised even today, in different forms during Gunlaa.”

The tradition brought together another practice as well. Priest Shakya further explains, “When the bihars were made, people started recording history in forms of paintings and other traditional arts. So many of the paubhas exhibited today are records of how and why the respective mahabihars were made, the stories behind the traditions we follow today, and the right way of their execution.”

What do the paubhas hold?

At Itumbahal, Keshchandra Mahabihar boasts  Bila:Pau, a long scripture that tells the story of Gurumappa, a demon who ate children, and how Keshchandra Aaju (a title given to the eldest member of a clan) formed the Mahabihar. This is put up for exhibition for 15 days during Gunlaa, from Saptami of the waxing moon to the next Saptami (of the waning moon). Priest Shakya says this 15-day exhibition is the longest among the bihars of Kathmandu, also symbolising Itumbahal’s long history.

This year, however, Bila:Pau was not displayed. “This year, due to Covid-19 fears and restrictions imposed, the situation was not favourable as it would have invited more people. Also, we were worried that the monsoon would damage the old scripture. Plus, there was also the problem of security as four or five people have to stay guard here (Itumbahal) but they have aged already and it is difficult for them to stand on guard.”

Many other mahabihars in Kathmandu, including Bhagawan Bahal, Maru Bahi, were empty and refrained from exhibiting anything this year. On the other hand, a few of the bihars exhibited the idols but lacked the visitors.

The Guital Mahabir was originally the royal court of King Sarbananda, who built it around 2,300 years ago. It has several courtyards, but two of them boast the idols and paubhas that retell history. There are four paubhas in Guintal. One shows the history of Dipankar Buddha and his miracles, along with how King Sarbananda came to build the Mahabihar, and his several attempts to call Dipankar Buddha for mahadaan and his afterlife.

The second paubha features stories of Bodhisattva and how he fed the hungry tigers his own flesh (story of Namobudhha). Likewise, the third one is about the king and the queen of Bessantar and the fourth of Siddhartha Gautam and his life story. All paubhas (here, thangkas), along with the idols of deities including Dipankar Buddha, Manjushree, Shakyamuni Buddha, and other smaller idols, are put up for only three days, starting on Gaijatra.

Meanwhile, yet other kinds of paubhas are exhibited in Kwa Bahal, also known as Hiranyavarna Mahabihar, in Lalitpur. The oldest of the paubhas (here, thangka) exhibited there depicts Maha Manjushree. The ‘Golden Temple’ Priest Lok Rarna Shakya explains, “The paubha shows Maha Manjushree on a lion (his vehicle) with two of his wives, Barada and Makshyeta. It is also a representation of how Manjushree cut the hill (at Chobhar) to drain the water in the Kathmandu valley.” He further adds the paubha tells the story of how Manjushree used lions to plough the fields in the valley to start agriculture and civilisation.

Not only Manjushree, but the Mahabihar also strongly has the essence of Dipankar Buddha, the very first Buddha known to humankind. So along with paubhas many idols of Dipankar Budhhas are exhibited every year. The history of the Mahabihar itself goes back to the Kirant dynasty, after Ananda bhante (monk), one of the primary disciples of Buddha, came and made the Mahabiharihar and settled there. Even though, this is not depicted in the paubhas exhibited here.

What other traditions do accompany this?

Gunlaa is considered a month for holy, spiritual, and religious activities using one’s all senses. People hold Samyak daan, Panchadaan, and build Dipankar Buddha idols and even make paubhas or donate ornaments or accessories to deities in the temples.

People also recite various holy scriptures this month, and this tradition is known as Tuta Bwonegu. The two most common kinds of holy scriptures read during this time are Pragya Paramita and Naam Sangati.

Itumbahal’s priest Swasti Ratna Shakya says Pragya Paramita contains all key lessons and principles of Buddhism. This bahal has a specific version of Pragya Paramita, Ashta Sahashrika, which was taken out only for display this year.

Reading the Pragya Paramita is believed to have a positive impact on people and the nation, it is read during crises and difficult situations, like this pandemic, according to Shakya. “However, we are trying to avoid any kind of gathering due to Covid-19, and reading the book has its own kind of rituals.”

A few locals in Guintal, however, recite Naam Sangati instead of Pragya Paramita.

However, the Covid-19 crisis significantly decreased the number of visitors everywhere this year. The exhibitions were held just as a formality in some places. But, local priests and their followers believe it will resume smoothly next year again. 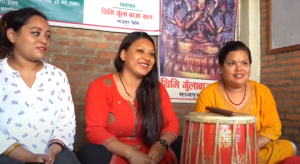 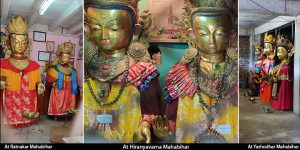 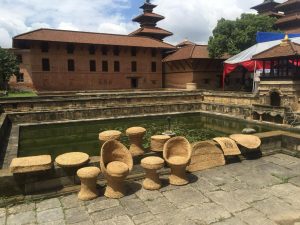