A sarod maestro’s offering to the Living Goddess One night five years ago, Suresh Raj Bajracharya saw the Living Goddess in his dream.

“I felt as if she was calling me to visit her. When a god calls you, you have to go. There are no ifs or buts,” says Bajracharya who went to visit the then Kumari of Patan, who has an important role to play in the ongoing Rato Machhindra Nath Jatra.

“I felt at peace there. People may not believe me, but I definitely felt her powers, which gave me a satisfaction like no other. I felt I had achieved something great,” remembers Bajracharya, one of the handful of sarod maestros living in Nepal.

“I felt so good that I decided to visit her every Saturday.” Bajracharya first sought permission from the Kumari’s parents to play inside her quarters in Ratnakar Mahavihar, but his request was declined. He did play outside for a few days, but he did not feel comfortable doing so.

I first heard him play, when I visited Yala Mandala, a year ago. He was sitting legs crossed, with a sitar-like instrument placed on it. At the top floor of the gallery surrounded by portraits depicting different faces of the Valley, he was playing the sarod, a classical string instrument which he has mastered over the years.

“Thirty-two years ago I saw a sarod for the first time and fell in love with its melodious tune,” says Bajracharya, who is well respected not just because of the musical form he practises, but also for being actively involved in making sure classical instruments are not forgotten by the younger generation.

“I wanted to see the Kumari play the sarod, but didn’t know how to do that,” adds Bajracharya, a member of the clan from which the Kumari of Patan is selected.

“One day as I was spending time at the Ratnakar Mahavihar, I read something that gave him a really nice idea.”

In one of the newspapers, he read about how the Kumari was going to be tutored at home. It made him wonder if he could do the same. “I wanted to teach her how to play the sarod because it would be a break for her and also would be an extra activity which could come handy in the future,” he says adding that he didn’t do it for money.

“All I wanted was to play in front of the goddess and maybe she would like to learn it as well,” he continues.

He felt he had to do it because the government doesn’t look after the Patan Kumari as well as it looks after the Kathmandu Kumari. “In the beginning, the parents were skeptical about it, but I explained how I wanted to give something in return and slowly they understood.”

But it was not an easy job teaching Samita Bajracharya, the then Kumari, how to play an instrument that not many have mastered over the years. “Of course it was tough. I was an outsider to her. There were thousands who’d come visit her there.  I didn’t expect it to be easy,” he adds.

“Initially, it was very hard because she didn’t want to talk. She spoke in signs and she used gestures to talk and for someone like me, who wasn’t aware of this, it made it tougher,” he says.

But that didn’t deter him from continuing to teach her. “I didn’t think it was going to be easy so I was prepared. The satisfaction I got from it can’t be compared to anything. I think the time I spent there increased my self-confidence too,” he adds.

The Kumari’s mother and brother helped Bajracharya initially which made it relatively easy for her to communicate with her teacher, but slowly she opened up to him and became interested to learn.

“When I was teaching the Kumari, I felt as if I was making the most sincere offering to the goddess. I was offering her something that was important to me, and that gave a satisfaction that cannot be described in words.”

In 2014, Samita Bajracharya completed her tenure as the Living Goddess and became a ‘mortal’ again. But the maestro Bajracharya did not stop teaching her. He continues to teach her to date.

The former Living Goddess has made good progress with the instrument. Her Facebook profile shows her playing the classical instrument!

“Five years ago, I had that dream, and it gave me the opportunity of a lifetime,” says the maestro. 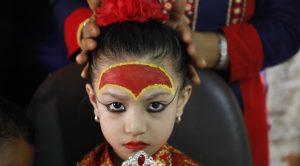 A day in the life of Lalitpur’s Living Goddess 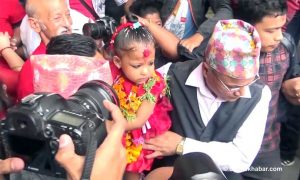