Police arrested three persons on the charge of a murder in Kathmandu, on Wednesday, March 17, 2021.

Aashish Limbu, a permanent resident of Urlabari in the Morang district of eastern Nepal, was found dead on the roadside in Malung, Tokha-1 of the capital last Saturday.

Sah is an Indian national whereas two others are permanent residents of the Rautahat district in southern Nepal. Sah and Alam were arrested in the capital whereas Mansuri in Rautahat.

The suspects were paraded during a press meet in Kathmandu this afternoon.

Speaking then, SSP Ashok Singh, the chief of the Metropolitan Police Range in the district, said they killed Limbu at a motorbike workshop operated by Mansuri and threw away the body by wrapping it in a bedsheet. 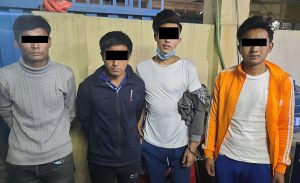