Drilling of second natural gas well to begin in Teku

Whereas drilling in the first natural gas well is still under experiment, the government has taken initiatives to kickstart the second phase of gas extraction in Kathmandu Valley, again in Teku.

Prithvi Lal Shrestha, Chief at the Natural Gas Division under the Department of Mines and Geology, procedures have begun for the commercial production and distribution of natural gas. Now, applications from interested contractors have been called for the project, according to him.

If the project gives positive results about production and distribution of the fuel, the government will move ahead with the plan; but if the results will be negative, the project will be dropped.

If the results are positive, similar tests will be carried out at other 11 stations inside the Valley. Earlier, an experiment done in Imadol of Lalitpur had found that extracting was would be impossible there.

While the government needs to spend around Rs  6 million to know if extraction is possible at one place, actual production and distribution will be much expensive.

The Japan International Cooperation Agency (JICA) had drilled a hole to extract natural gas in Teku of Kathmandu around 35 years ago. The hole, however, has been covered with clay and sand now thanks to negligence. 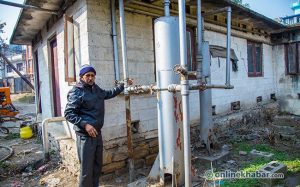