Floodwater inundates Parasi, the district headquarters of the Nawalparasi district, on Friday, August 27, 2021.

Two persons have died whereas one is missing after a flood washed them away, following incessant rainfall, in the Nawalparasi district of Lumbini, on Friday.

Police Inspector Krishna Dhital of the Sunawal Area Police Office says Tamang’s whereabouts are not known yet. A search mission has been launched, according to him.

The rainfall continuous from last night has inundated the market area in the district headquarters, Parasi. Officials have estimated the loss would amount to millions of rupees. 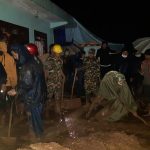