Young Nepalis are shifting to podcasts from TVs. Now, it’s challenging to sustain the shows Photo by Soundtrap on Unsplash

Growing up in Damak, 19-year-old Ramesh Sharma was always glued to the TV. He loved the content that was on offer as he spent his time watching cartoons, Indian sitcoms and call-in shows. But, as he got older, his preference changed as did his interest, but the content on the TV did not.

By the time he was 16, he gave up watching TV and would often spend time listening to a podcast called the Joe Rogan Experience on YouTube. There, he learnt a lot. From how to establish a business to spirituality, the podcast helped him be aware of what was happening in the world and where he fits in it.

Wanting similar content, he started to look for podcasts like that in Nepal. But, sadly, for Sharma, podcasts like the Joe Rogan Experience did not exist here. After looking for one, he finally came across one called Mero 2 Paisa, a podcast on various life-related subjects that primarily included entrepreneurship, business and even touched a bit on politics and spirituality.

“That show gave me something similar. It was contextual as was it relevant. I don’t want to compare it to the Joe Rogan Experience, but it has similar vibes but with a Nepali context.”

Podcasting culture is getting quite popular in Nepal. As Nepal’s urban youth, thanks to the internet, has given up on Nepali TV, many have started getting hooked on other means of entertainment including podcasts. Even though many podcasts have started out as hobbies, there are some that have started to attract sponsors and have become a full-fledged business. But, with a lot of challenges ahead, everyone feels that to make it a sustainable business, they have a lot of work to do.

In the past few years, many podcasts have started ranging for health, fitness, business, entertainment, politics, mental health and sports.

Anup Ghimire, the founder of Viewfinders Production, started Doers, a podcast dedicated to entrepreneurs in 2019. In the podcast, he hosted people who had done something in business or life.

“When I started it, I didn’t expect much. I just wanted to share the stories of entrepreneurs or ‘doers’ like me because I knew that their stories would help a lot of people who want to do something in life,” says Ghimire. “It was a show not for the mass but for a niche audience which appreciated the content a lot.”

Having done the podcast consistently for 60 episodes, he then started a few other podcasts. First was the Finance Factory which dealt with the share market, banking and finance; the Good Health which focussed on health in general and fitness; Millennials of Nepal which is about all things about lifestyle; and finally Khula Manch, a podcast about politics.

“The younger generation needs something different and that is what we at Viewfinders are trying to do: provide relevant and timely content that people can relate to,” says Ghimire. “I’ve not hosted these podcasts myself because if I did, I would not be asking relevant questions and that would be disrespectful for the audience.”

All five podcasts that come out from his production are released on a weekly basis as he feels consistency is key if one wants to build something big in the long run. He says that even though he knows most of these shows will not make a penny for a while, putting quality content out there for the audience who are in desperate need of it is worth it.

One podcast which discusses a wide range of issues is Audio Bit produced by Shutter Crop Films. The podcast has been discussing issues ranging from mental health and wellbeing, sexual harassment, self-love, along social issues like the Nijgadh International Airport.

These episodes have been shared quite widely and have got a good amount of views. Neha Hirachan, the podcast’s host, says she wants to discuss issues that are not talked about as much as she wants to start a dialogue on these running issues.

“We want our audiences to have an insight,” she says. “When we started, we didn’t plan to do shows based on social-cultural/political aspects of the country, but as we started to build a platform, we started to feel a sense of responsibility and focus on more humanitarian things.”

Boju Bajai, one of Nepal’s most popular podcasts, has also been talking about issues that are considered taboo. Started by two feminists in 2016, the podcast has talked about issues ranging from inclusiveness in Nepal, women being treated as second class citizens, the #metoo movement, sexuality and body and slut-shaming.

“These issues are important to talk about if we want to see a change in our society,” says Bhrikuti Rai, a co-founder of the podcast and a journalist. “I might not do much now, but we believe that in the longer run, we can be a catalyst for change.”

But for that, Rai says, that there is a need for consistency but for now, they are happy with what they have been able to do and have now started to look at making it a self-sustainable organisation.

“That will take time, but that is what our plan is because we want to expand and dwell more on multimedia, create a space for more voices like ours and create more conversation about issues normally missed out by mainstream media.”

However, the current market for advertising on podcasts is still an alien concept. Ashish Adhikari, who has done nearly 100 podcasts, says he never did them with the aim that he would have advertisements on it. To him, it was just a passion project which has now come to a standstill for this specific reason.

“We were hoping to reach a target and make it into a full-fledged business. But due to issues within the team, we could not do that,” he says.

But, with Nepalis being exposed to peak podcast like the Joe Rogan Experience, many have just copied what he has tried to do and started to produce video podcasts. But, many say these video podcasts are more interviews than a podcast.

“In its true form, podcasts are just audios. Joe Rogan Experience was audio only for a long time. But, since he started to do a video-based podcast, everyone in Nepal thought doing that would get them views and more recognition,” says Ayush Bajracharya, the co-founder of Ke Chha Ta podcast.

His views are echoed by Rai who feels that Nepalis need to move beyond the stereotypical format of a podcast in which they call a guest and talk about an issue to a more holistic storytelling show with a set narrative that can be engaging with the audience.

“Nepali podcast has a long way to go. People are doing it, which is good, but the challenge is to do it consistently which define who they are,” says Rai. 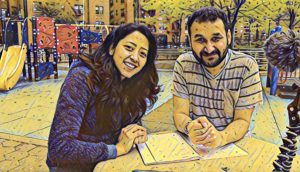 In locked down Nepal, podcasting thrives to spread positivity and preparedness