Uterine prolapse is still a concern for women in Nepal. They need more awareness of it A labelled diagram of a prolapsed uterus. Photo: Wikimedia Commons

Working as a gynaecologist for the past few decades, Dr Bina Basnyat has based herself in different parts of the country, serving different groups of women. While women in different areas would come to her to report different problems, one was so common across villages of the hills and mountains of Nepal: uterine prolapse.

“In my practice and fieldwork, it was more common in women who are prone to extensive work after childbirth. It was probably because they would walk miles, uphill, carrying a heavy load,” she adds, “Women from Terai were also prone to prolapse because of extensive work after childbirth. But, in comparison to the hilly areas, they were less in number. So, geography also has been known to be a factor here [though not proven].”

With time passing, many rural areas of the country are accessible with roads, and it has decreased women’s compulsion to carry loads for hours. On the other hand, people are more aware of health complications these days. Consequently, the problem’s gravity dropped.

Yet, many women in the Kathmandu valley also complain of the problem. “It seems with age, women are more susceptible to the prolapse and so in cities like Kathmandu, uterine prolapse is more common in older women.”

Whereas the media and general health sector would be filled with discussions of the issue, uterine prolapse used to be one of the most highlighted reproductive health problems in the past. In recent years, the focus is not visible, yet stakeholders including gynaecologists say uterine prolapse is still a problem in Nepal and all women, in general, should be aware of the risks.

What is uterine prolapse?

If there is something that only women can do, that is to carry a baby. This natural and important part of the human lifecycle is possible because women have a uterus. But, this “natural gift” for women also brings them problems. Apart from PCOD and PCOS, another problem that women go through is uterine prolapse.

Uterine prolapse is the condition where a woman suffers from her uterus sagging from its position. Locally, it is also referred to as aang khasnu in Nepal.

Gynaecologists explain the uterus is held in place with several ligaments: round, cardinal, pubocervical and uterosacral. These ligaments support and keep different parts of the uterus, including fallopian tubes, ovaries and cervix in the right places.

When one or more kinds of ligaments weaken, the uterus sags from its position. In many cases, the cervix even protrudes out of the vagina, resulting in discomfort, or causes a hernia in many when it pushes the bladder or intestines.

Why does the prolapse occur? Who are at risk?

According to Anjana Karki, a gynaecologist at B&B Hospital, “The most common reasons are childbirth and age.”

She explains, “In the case of natural birth, the mother experiences some loosening of the ligaments. This is true for 99 per cent of women although the degree varies. The loosening will increase when the labour is painful and long. And, if women have less than two years of gap between two pregnancies, the ligament tear gets more extensive and, thus, it increases the chances of uterine prolapse.”

Whereas Bina Basnyat says she has found many women in Kathmandu, in particular, in elder ages, suffering from the problem, Anjana Karki seconds her and says cases have decreased in urban women as the lifestyle has changed here and now new mothers get more rest and care. “Also, women today do not prefer to have more than two children. So the wear and tear around the uterus ligaments also are less.”

Having said that, both Karki and Basnyat say there have been a few rare cases where young women who are yet to conceive too suffer from [congenital uterovaginal prolapse]. “This is because of a congenital (meaning by birth) disorder in women. This does not mean that it is genetic, just that some women have weaker pelvic ligaments or nervous system.”

Are women aware of it?

Although women are at the receiving end, doctors say they are misinformed about this problem. Women either fail to notice the prolapse because it has little to no pain or they get spooked by the discomfort and fear the prolapse and insist on getting surgery.

“Young couples, who are planning a family, have rarely asked us about it, but we let them know about the possibilities,” says Basnyat, adding the factor is not that big though.

On the other hand, Karki highlights another dimension of the problem, “Educated young women who know about the problem get so freaked that they insist on getting their uterus out to avoid the prolapse in the future.” And, when the lack of knowledge meets unethical practitioners, women have been victims of unnecessary uterine removals too, says Karki.

What are the solutions then?

Basnyat says there are technologies that hold the ligaments together with mesh [made up of synthetic polymers or biopolymers] and put the uterus back to its place [with laparoscopic sacrocolpopexy]. Another option is to place a ring [a kind of vaginal pessary] inside that slows the prolapse and the difficulty caused by it.

“Most of the time, a part of the cervix hangs out of the woman [vaginal vault prolapse], so in such conditions, we also do a reconstruction of the cervix, so that the discomfort is eliminated but the woman can still conceive and carry a baby,” Basnyat adds, stating this approach is taken especially in case of young women who are in huge discomfort but are yet to conceive or want to conceive further.

“Some women in the early stages get conscious and scared of having a uterine prolapse and then insist on getting surgery, but we still suggest them to go for the alternatives, even if they do not want to have a baby,” Karki says.

They explain it is because the loose ligaments that cause the uterine prolapse can also do the same to other organs, like the bladder and the intestines. Basnyat says, “Even if we do the operation, we cannot guarantee that there will be no complications.”

“There is that chance of the prolapse surgery going bad, with possible ulcer or cancer in the postoperative phase,” warns Shristi Shrestha Prajapati, a gyno-oncologist at Bhaktapur Cancer Hospital. Karki, on the other hand, adds, “Women have come to us after insisting on the surgery, with many complaints. But at that point, we cannot help them. So the best advice we can give is to think before the surgery and not insist on the unnecessary surgery.”

But, for women, who are near to or have had menopause, and are in severe discomfort, doctors do tend to go for surgical removal, given their other organs are not affected.

Prajapati clarifies surgical removal of any organ should be the last option.

“There are two major conditions when we opt for surgery: One, where it is cancerous and endangers the collapse or failure of other organs, and second is non-cancerous, where the uterus has developed fibroids and is complicating other organs in the body,” she says.

“Even in cancerous type, we have to weigh the outcomes based on various factors like their age, health conditions, placement of the tumour or cancer cells, its stage, symptoms and their impacts of the body,” she explains.

Can one prevent the prolapse?

Doctors recommend a healthy lifestyle and diet first and foremost if one wants to prevent this problem altogether. In addition, medically, they suggest getting an ultrasound on a regular basis that can detect shifts in the uterus position and take early measures as mentioned above. 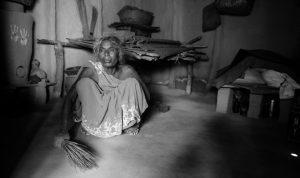 The spectre of uterine prolapse looms over women of Nepal