Donald Lu, the United States assistant secretary of state for South and Central Asian affairs, meetings CPN-UML Chairman KP Sharma Oli to ask him make a decision on the controversial MCC deal as soon as possible, in Kathmandu, on Friday, November 19, 2021.

Donald Lu, the United States assistant secretary of state for South and Central Asian affairs, has requested senior political leaders in Nepal to make a decision on the 2017 deal between the two countries about the Millennium Challenge Corporation (MCC) project.

The deal has been stuck in limbo as the parliament has failed to endorse the deal owing to differences within and between major political forces of the country. The parliamentary ratification is a prerequisite for the deal’s implementation in the country.

The leaders, however, did not give any specific answer to the request, according to sources privy to the meetings.

Lu is in Kathmandu on an official visit since Wednesday.

Nepali politicians and society are virtually divided about the deal as many people argue the deal has some provisions against the national sovereignty and national interests whereas many others think it is a great help for the country’s development. Read more about the long-standing dispute about the MCC deal. 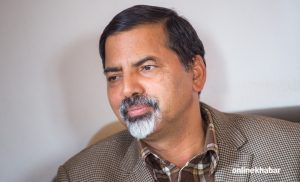