Sushil Sharma Subedi was struggling to deal with all the uncertainty and the trauma that the Covid-19 pandemic has incited. He was looking for an alternative to consult doctors during the Covid-19 pandemic. On the one hand, there were restrictions on transportation and on the other hand, the fear of contracting Covid-19 also restricted those visiting hospitals.

Then, TeleUpchar came to his knowledge through some acquaintance. “Using the app, I consulted the specialised doctor and got my counseling sessions accordingly.”

Since the Covid-19 pandemic hit the country last year, almost everything including healthcare has gone digital, even in Nepal. During the pandemic when people were struggling to reach health facilities, two youth, Suman Giri and Sunil Pandey, living in the USA for the past 15 years came up with TeleUpachar, an app that connects patients and doctors virtually in order to solve problems of many patients like Subedi.

Giving back to the country

Giri, who is already in the healthcare technology industry in the USA, and his long-time friend Pandey, who has experience working with over 500 technology companies in Silicon Valley, thought of bringing their experiences together to create a meaningful impact on Nepal as a way of giving back to the country, according to both Giri and Pandey.

“We identified healthcare, mainly health-tech, as one of the potential sectors finding with an opportunity for both creating a sustainable business and driving large-scale impact,” states Giri.

It took them around six months to execute this idea and start a company named Vriya Technologies. “We then recruited a team of two. Then, we tested a few ideas, talked to a few experts in the field, and then moved ahead when the time came,” says Giri.

Both share TeleUpachar, one of the products of their company, was conceived at the beginning of Covid-19. The duo foresaw the need for telemedicine and remote-medicine delivery platform and started to work on it immediately. And, after five months, the app was officially launched in July 2020. They started with a web app first and then added a mobile app recently.

And, around eight months back, Suman Giri and Sunil Pandey handed over the management and operation of TeleUpachar to Suraj Giri, whom the duo had met during a social campaigning programme. As of now, there are about eight volunteers working on this initiative.

Suraj Giri explains TeleUpachar also maintains the medical history of the patients, besides handling appointment booking, virtual doctor visits, diagnoses, treatment plans, e-prescription, and follow-up. Other than this, it also delivers medicines at patients’ doorsteps and also offers corporate health packages as per need. For the ones who cannot type, the app also has the facility to audio-record their symptoms.

Suraj Giri, who works as the deputy CEO of the company, recounts, “After TeleUpachar was handed over to us, we carried out a feasibility study of this app for about six months and after that, we all were convinced about its usage. It has been about two months since we actively started working on promoting this app.”

As per Suman Giri, “Our challenge was to say no to a hundred other things we could be working on and focus singularly on this vision. Once the app was made, building the right partnerships and onboarding doctors was the key.”

Other than this, Suraj Giri adds, “It was quite difficult to convince the people about its practicality in Nepal, especially in remote areas. Further, low technology literacy also acts as a barrier. Moreover, a lack of policy regarding telemedicine in Nepal stands as the major roadblock for us.”

However, gradually overcoming these challenges, TeleUpchar has enrolled over 100 NMC-registered doctors, and over 1,500 patients across the country have been using its services currently.

According to Suraj Giri, people came to their platform mainly through word-of-mouth recommendations and also through the recommendation of the doctors who are onboard. But still, Suman Giri and Sunil Pandey fear they have been currently riding a wave that has been facilitated by the Covid-19 crisis and whether the shift towards digital health persists even after the pandemic remains to be seen.

“We only earn through corporate health packages. We take very small service charges from the online consultation charge paid to doctors by the patients,” Suraj Giri informs, “As of now, we are struggling financially to sustain. We are spending money from our pockets even for operation costs.”

Still, with an aim to create a greater impact on healthcare in Nepal, the TeleUpachar team has started partnering with local governments and corporations to use telemedicine to deliver healthcare facilities in remote areas.

“We have named this project Swasthyaaramba, which is mainly targeted to provide free and quality healthcare facilities to under-privileged communities in rural parts of Nepal, where healthcare is still a luxury,” says Suraj Giri.

This project, which the team considered a significant pivot, will start from July 30 this year. Apart from this, TeleUpachar is also planning to establish telemedicine services at all the health posts of Nepal, especially in rural areas as computers, mobile phones and the internet have reached there, but not doctors. Further, the team aims at providing medicines at a very low price to the public and utilising the government pathology labs and technicians in the long run. 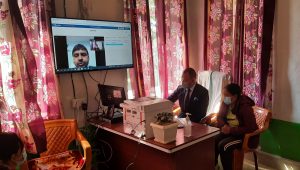