Two persons have died in an SUV accident in Waling municipality-10 of the Syangja district in Gandaki on Sunday evening.

The victims have been identified as Dal Bahadur Palli (77) and Ganga Palli (32), residents of Galyang municipality-10 of the district. Seriously injured in the accident, both of them died during treatment at the Waling Primary Hospital at Garhaun, informs DSP Rajendra Prasad Adhikari, the District Police Office.

The vehicle (Ga 1 Ja 4918) had fallen around 50 metres down the dirt track while it was carrying 19 passengers to take them to Lakhudanda, Galyang-10, from Waling Bazaar. The passengers were returning after their Dashain shopping.

The vehicle fell off the road as the driver lost control over the vehicle while moving uphill.

Meanwhile, 17 others have sustained injuries in the accident. Most of them are residents of Galyang municipality-10. Six of the injured have been referred to Pokhara of Kaski for further treatment whereas others are at the Garhaun Primary Hospital.

The driver, however, is not injured. Police are interrogating for further investigation. 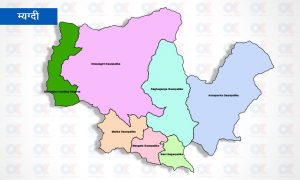