In recent months, Rajendra Tamang of Kanchanpur hardly got time off from transporting coronavirus-infected patients. But, for the past nine days, he has been battling with the coronavirus himself. He does not know when exactly, but he thinks he got exposed while on duty.

Now, in the isolation, he is calling for help for his treatment as no one is there to ask him how he is doing. On the other hand, his case has revealed the risk that other ambulance drivers share with him and the chaos the province could face if the drivers, available in a limited number, fall sick.

Tamang is an ambulance driver by profession. For the past four years, he has been driving an ambulance for the Nepal Red Cross Society Baise Bichawa branch.

Tamang has carried hundreds of people, despite the hour of the day, from Kanchanpur Punarwas, Belauri and other areas who complained of having a fever, body aches and respiratory problems to different hospitals. of Dhangadhi, Mahendranagar, Nepalgunj, and Kohalpur.

While carrying those with symptoms similar to the coronavirus infection, Tamang was definitely scared of getting infected. But, every time the phone rang, he would get back to his duty.

In an interview with Onlinekhabar, he shares all he could think about was “Who will take carry the patients if not me?”

“How do you know who is infected? It is our profession to carry the sick. But, eventually, I got infected myself,” shares Tamang.

It was 10 days ago when he dropped a patient and returned home. He found himself suffering from body aches and fever. He did an antigen test and found he was positive.

Tamang, who is in home isolation, stills keeps getting calls from patients, but he is forced to deny the request. “I was carrying patients without any mask, sanitiser or PPE, and I got infected. Now I am in isolation,” he complains, “There is no one to encourage me. No one has called me to ask how I am.”

He demands that the government should at least provide treatment facilities to the frontline workers like him.

Fear of being the spreader

In isolation, Tamang says, “I am worried about other family members getting infected.”

Like him, Madan Kumar Dhungana of Dhangadhi sub-metropolitan city, Kailali, is also an ambulance driver by profession.

Dhungana drives the ambulance of the Nepal Society of Families of the Disappeared and Missing (NEFAD) in Kailali. He has been an ambulance driver for the past 10 years and considers it is his duty to carry patients and is active even during the epidemic. Dhungana shares the same fear as Tamang.

“The government has not managed separate ambulances to carry Covid-19 and non-Covid-19 patients,” he says. Dhungana also gets regular calls from patients needing to be carried to the hospital. “But I am worried that the infection will spread from us. ‘

He further laments that just like in the first phase of the pandemic, because the local governments have not managed separate ambulances for the patients, the risk is still potent.

He regularly carries Covid-19 patients. Even though he is vaccinated, he lives together with his family. “There is a lack of masks, sanitisers and PPEs, yet we are still working. If we get infected, there is a danger of us being the spreader for our families and communities,” Dhungana shares his concerns.

Another ambulance driver, Bam Bahadur Bohara of Dhangadhi, who has been operating an ambulance for 12 years, is also working in a similar situation. His concerns are also not that different. “We can only hope and trust in god that our families do not get infected.”

Laxman Bahadur Singh, the president of the Ambulance Drivers Association (Sudurpaschim), says that no stakeholder has understood their plight in the pandemic. On the contrary, he is saddened by their growing tendency to complain.

“The government has made arrangements to give additional allowances to the frontline health workers and security personnel,” Singh informs. “But, no one has thought about us, the ambulance drivers.”

The ambulance drivers are still working on a monthly salary of Rs 7,000/ 8,000. The Association has demanded an additional allowance for them.

He says that the local administration and the provincial government both have ignored even when they report their concerns. “We had asked the district administration office and the Ministry of Social Development of the province to come up with a modality regarding how to operate ambulances during this situation, but they did not pay attention.”

“Everyone is trying to get their work done by nepotism or by giving political and administrative pressure. But, for how long? How can a person without such access manage an ambulance for himself?” he questions.

One ambulance for Seti Provincial Hospital

The Seti Provincial Hospital, the only referral hospital for all nine districts of the province, has now become a treatment centre for severely infected Covid-19 patients. But, the hospital has only one ambulance to carry the patients. This has caused problems for the hospital.

“We are using an ambulance provided by the (Social Development) Ministry,” informs Dilip Kumar Shrestha, the information officer of the Seti Provincial Hospital.

“Sometimes, it gets difficult when we get two or three phone calls at a time. In such a case, we would take turns to bring them in,” he adds.

On the other hand, there is only one person to drive the ambulance. If he falls ill or has to go out for work, there is no one to carry the patients. Shrestha says such a situation has not been created yet. But, if it does, he says, the driver of the hearse will be used.

Not our jurisdiction: Ministry

Meanwhile, Narendra Karki, the ministry’s spokesperson and head of the Health Division, says, “They should come up to us with their grievances.” But, he adds that any concern of the non-governmental ambulance drivers should be managed by the concerned organisations.

The government has given them priority in matters including vaccination. However, the ministry says it can only think to address concerns of those in service at the borders or isolation centres. 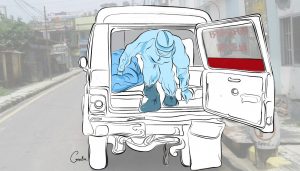 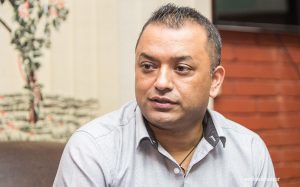