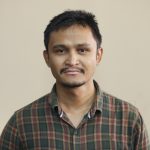 Nepali teenagers, who enjoy suspense, thriller and fantasy stories always had one complaint: they did not have any Nepali books to read. However, the scenario changed as soon as Subin Bhattarai’s novels started to hit the market.

In the writing journey of about a decade, Subin Bhattarai has brought such novels that laid the foundation for reading culture among teenagers and the young generation.

In a conversation with Onlinekhabar, Bhattarai who recently released his sixth book, Ijoriya, shares his experience being a fictional writer in Nepal and changing the game for the new generation.

Why did you shift from environmental science to literature?

Not a shift… Even when I was studying environmental science, I used to write stories and poems. I went to study science only because I had to become a doctor or an engineer. I never thought that I could earn money like this and live by writing.

But, I got sick in the final two years of my high school (grades 11-12), and it took me four years to complete the two grades. Then, the dream of becoming a doctor or engineer vanished. After one dream died, I had to think of other ways and I became a student of environmental science in search of another dream.

Even when I was a student of environmental science, I was inclined towards literature. Meanwhile, Kathaki Patra, my first work, an anthology of short stories, was published. Then, Summer Love (2012) was published.

Yes, Summer Love made you a celebrity. It was followed by many books of the same category. What do you say about this?

Yes, I didn’t count the number of manuscripts they sent me, seeking my feedback. I couldn’t go through each of them, but in some, I found the shadow of my own style. I don’t like any book if that reads like my own. I even don’t like my own writings from the past.

Of course, any writer is influenced by other writers to some extent. But, they cannot be completely overwhelmed by them.

Four of your books were released around Dashain. But, how many books do you buy on Dashain for yourself?

I read many authors’ books over and over again. When I get stuck while writing, I start reading. Bishweshwar Prasad Koirala, Parijat, Dhuvchandra Gautam, Dha Cha Gotame, Bijay Malla, Govinda Malla and Bhawani Bhikshu also influence me.

Recently, I read Bhabani Bhikshu’s Aagat. After reading all of the seven books by Gotame, I wrote a long article. Gotame’s Ghamka Pailaharu is a book that I re-read every year. That book gives me a wonderful feeling every time. I read Govinda Malla’s Kathaikatha too very often.

You watch a lot of films, but why did Summer Love flop?

I watch movies, and web series a lot. But, the film based on my own book was a flop. I let them make a movie based on the book to make it better, but they spoiled it. Especially in the beginning, the rights went from one team to another team. My differences with the filmmaking team started from the very beginning. I didn’t like them forcing me for doing this or that.

I had to fight with them to do as I said. Rather than fight, I took the path of retreating myself. The director could not do justice to the author’s creation. From this experience, I have now thought of making a film myself. One day, I will make it.

You have written three books on love. How many times did you survive a breakup?

I am generous in love. People become generous and open when they are single. I am a person who is looking for love. When this happened, it seemed that the relationship with some would progress and it would end in the middle. Some people liked me and some did not appreciate it.

This searching nature led me to marriage. Anyway, my search for love was successful.

You have written six books in 11 years, but still, the known literary circles do not accept you as a writer. Why?

If someone doesn’t think I’m a writer, that’s their right to say so. The writer is not made by anyone, the readers make writers. It is the readers’ job to make someone a writer. I have gained so many readers. There are many readers who buy and read Subin Bhattarai’s books; they consider me a writer.

Nor have you received any prize.

I don’t know about that. But, I don’t have any lust for awards and prizes. I don’t oppose them, but I don’t believe that awards are everything, and only awarded books are good books.

Some people also call you Nepal’s Chetan Bhagat. What do you think about this?

I don’t like this. Chetan Bhagat has his own scale and style; I also have mine. In fact, my writing style is changing — it was a particular type in Summer Love and Saya, but it’s different in Priya Sufi and Ijoriya. The first book, Kathaki Patra, was even different.

Any literature fan who minutely analyses words and styles knows the difference I have from Chetan Bhagat. But, they comment anything without reading a book.

If literature has a lifespan, how long is your literary journey?

It is difficult to say. It has been 11 years since I started writing books, and it’s going on until now. That’s why my literature seems to last for a long time.

Today’s young generation thinks the topic of sex is normal, I don’t know what tomorrow’s generation will think. In addition, this is the generation that is frustrated in matters of sex; the earlier generation was distant when talking about sex. Literature documents all of them.

Despite acceptance and rejection, you are living as a full-time writer. How easy is it?

To date, I have lived on the money I have earned from writing. There is no need to worry about money; the royalties of the book have been supporting me so far. So far so good. It is impossible to say what will happen after the next 10 years.

Chand is an Onlinekhabar correspondent.