Street food found in the alleys and streets of Kathmandu is popular among locals and others alike. Many people prefer having it every day. They consider it as the beauty of the city while there are also those who take it as a disturbance during commuting, hence are demanding its removal from the busy streets.

Between these two sides, the demand for the removal of street food stalls is growing up in Kathmandu in the wake of the recent cholera spread. But, stakeholders say the unplanned removal of food stalls should be stopped, rather the local governments should come up with a concrete plan to manage them.

The aesthetics of street food

Former director-general of the Department of Commerce, Supplies and Consumer Protection, Kumar Dahal, believes street food helps in maintaining the beauty of the city rather than ruining it.

“Alongside making the city beautiful, this also makes the city happening and controls the market price as well,” Dahal says. “Instead of prohibiting street food, the local governments should work on managing it in an appropriate way.”

Even developed countries like the USA, Belgium, Germany, Thailand, Malaysia and Singapore have a street food culture. If such a culture ruined the beauty of a city, those developed countries would not opt to place eateries on the streets. That is why stalls of street food must be well managed by the concerned authority, he adds.

Along with promoting the local culinary art, street food also makes things easy for those who cannot afford to go to a restaurant. Dahal says since street food is a source of bread and butter for many individuals, it should not be prohibited.

But, he suggests setting up a specific time for these food stalls. Some countries allocate specific time, for example only after 5 pm. They also have dedicated places for them.

But, the assistant spokesperson of Kathmandu metropolitan city, Mahesh Kumar Kafle, is in favour of removing street food stalls from the city. He says, “Pedestrian pavements are only for pedestrians; these stalls disturb the flow of traffic in the city. They must be removed.”

He says those who want to run a business should search for an appropriate spot and follow the set criteria.

According to him, the city government does not have any intention to hurt anyone, but the grievances from the public have compelled the metropolitan city to make a decision of removing food stalls. With that, the increase in cholera cases has also made the Kathmandu metropolitan office take such a decision.

“Just because there is an open space, it is not justified to run their businesses. It is rather objectionable,” says Kafle. “Since the street food lacks quality and disturbs the flow of traffic, we decided to remove it. Moreover, public health safety is our major concern.”

The Lalitpur metropolitan city has barred the sale of panipuri on the roadside after the Epidemiology and Disease Control Division found cholera-causing bacteria when it tested the water of a panipuri stall in Kathmandu.

Sitaram Hachhethu, the chief of the Lalitpur Metropolitan Police, says street food is generally unhygienic whereas its quality is not examined, so there must be dedicated time, space and criteria for them.

“If Panipuri stalls are allowed to do their business on the street, it will be difficult to manage the narrow pavements. Similarly, due to such stalls, the commuters also go through a lot of trouble.”

He further says, “The street food in the foreign countries is hygienic and free of dust. The quality is checked regularly. But in Nepal, there is no such system. If there was such a system, panipuri wouldn’t have been detected with the cholera-causing bacteria.”

The Department of Food Technology and Quality Control also accepts that street food does not meet the standard quality. The spokesperson of the department, Mohan Krishna Maharjan, informs Onlinekhabar that after detecting bacteria in Kathmandu’s water, the department, however, has been inspecting restaurants and hotels as well. 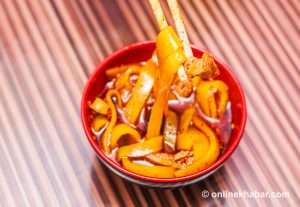