Police say the woman who was found murdered in a forest area of Dakshinkali in the southern outskirts of Kathmandu was Santoshi Subba, who had gone viral on YouTube videos with her talent producing sounds of different animals and birds.

SSP Ashok Singh, the chief of the Kathmandu Police Office, says the body found on Tuesday belonged to Subba.

“She might be hit by some heavy object. The face is severely damaged,” Singh says.

Police and doctors have suspected she might be pregnant. 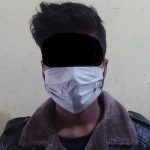 Dang: Police arrest jailbird who had run away with a motorbike a month ago