My first encounter with Kathmandu happened sometime during my teenage when flipping the pages of a hardbound library book:​ “Joto Kando Kathmandute” (which roughly translates to “The many myriad incidents in Kathmandu​’).

This book often found its place in the answer of a frequent quiz question: “Which ​other Feluda ​novel, except for “London-e Feluda” and “Tintoretto​-​r Jishu”, was set in a foreign country?”

Feluda connoisseurs remember the book for how Feluda, a private investigator, avenged himself on Maganlal Meghraj (​Feluda’s ​arch-enemy, if you will) for covertly intoxicating Lalmohan Ganguly by​ putting LSD in sugar cubes for his tea. ​The narrative gives the readers a heady mix of drug smugglers, fake medicine rackets, hippies and historical sites while staying in Kathmandu​: it was fun and thrill in abundance.

About a decade later when I moved to the city, adventure was not on my mind, mere domesticity of a 10-5 job was. But what could have been a predictable, linear and even a monotonous routine, was soon broken by the earthquake, followed by the embargo.

​T​he ​frustrating inconveniences did not let the days remain nondescript, but there has certainly been more to life than accommodating everything according to the 13-hour loadshedding schedule.

When I first moved to Kathmandu, apart from travelling in and around the city, my ​plan​ was to learn Nepali. Given that my mother-tongue and Nepali share the same roots, I thought it was a modest ambition.

But I soon realised that the very similarity was the biggest impediment! My mind kept ‘autocorrecting’ ‘timi’ to ‘tumi’ for the longest time; I instinctively said ‘ke’ when I asked ‘who’, instead of ‘what’; and I am still struggling to say ‘kina’ for ‘why’, as I have been saying ‘keno’ all my life.

And the intricate diphthongs in the language ​certainly did not go well with my ‘o’ sounds​. Also, try learning conjugations for all the five second-persons! I think I showed great prudence (and not lack of perseverance)​ when I chose to stick to just ‘timi’ and ‘tapai’.

And boy, I can’t get enough of “shubh bihaani” (instead of “good morning”) because it treats me to the  joy of revisiting the word ‘bihaan’, one of my favourite Bangla words.

But imagine my wonder when I  learnt, that too inadvertently, that what is referred to as ‘Nepal Bhasha’ is Newari, a Sino-Tibetan language spoken by the Newars, the original inhabitants of the Valley.

In my limited interaction with young Newars, I learnt that they speak the language with little expertise and most of them do not how to read or write it. They are more comfortable in speaking in Nepali. No wonder Newari is seen by many as an ‘endangered’ language.

My incredulity was heightened by the fact that Nepal Bhasa had a rich tradition of literature, and an emphatic attempt at revival was made just a little more than half-a-century ago. The fact that it could be phased out along with the languages of other ethnic communities seemed bizarre to me given that there seemed to be a substantial upper-class Newar population with high social and economic mobility.

My dismay was met with sheer coolness by anyone I broached this topic to. It was, apparently, a non-issue; there were other languages (and their communities) which needed more attention, I was told.

Of course, I do not pretend to have grasped the complexity of political history of this neighbouring country of mine, but still the implicit complicity of the Newar community that people have hinted at,  is not something I have comprehended very well. It really makes me wonder, like Led Zep would say.

This consternation has a self-reflexive angle which exhibits itself in different avatars back home. The tyranny of Hindi as the ‘official’ language back in the Indian Union is well-known, but the way it clubs independent languages (in the garb of ‘dialects’) like Marwari, Bhojpuri, Mithili, Garhwali, Kumaoni under its fold to show a statistical ‘majority’ status is even more appalling.

Consolidation of these languages denies identity and access to education and other services in these languages. It imposes a palpable sense of ‘backwardness’. But most of the ‘marginalised’ languages of India probably never have enjoyed being the language at the Centre for centuries, nor did they have upper-middle class native speakers living in the Capital. Hope my dismay does not seem misplaced now!

Without aiming to romanticise, I must say that the charm and historicity of the city touched me effortlessly.

In my outsider’s eyes the modern-day seemed to have emanated from a past that wasn’t dead yet; not enclosed in a museum as a relic.

Maybe my experience and thoughts were shaped by the constant exposure to Lalitpur surroundings, which “looked” older than Kathmandu, as my friends had pointed out later.

The major Indian metros I’ve lived in\visited are all historical cities in some sense, but to find ‘oldness’ there, you need to go looking for it in nooks and crevices.

Sometimes while walking in the narrow lanes overlooked by red-brick buildings and interspersed by small temples I am revisited by the thrill of Feluda having walked these same streets.

The constant honking and tackling of traffic soon brings me to my surroundings, though. The same happens when I walk back home from work in the evening and the sun goes down between the hills; just when I think of standing at a safe corner on the pavement and take in the colours and shadows on the sky, a vehicle passes spewing the netherworld’s black smoke and gives me a reality check.

If there is anything else that bothers me as much as the soot in Kathmandu is the almost-omnipresence of Bollywood. At eateries, on micros and in houses – there’s no escaping it and indulging in it is a door I had closed long time back. It reminds me of home, in an Amrish Puri way.

And speaking of home, I hope that between stuffing my face with momos, yomarees and Gorkha beer, when I  go back, I will have the ability to correctly use ‘timi’ and ‘tapai’ (well most of the time) and a pair of resilient lungs that can survive anywhere.

The author is a Bengali expat living in Lalitpur. 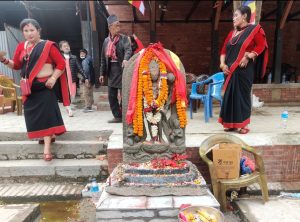