Red tax: Everything you should know about Nepal protest over sanitary pad price A protest took place in Kathmandu on September 23 in a bid to pressurise the government to remove tax from menstrual products. Photo: Sanjit Pariyar

On warm afternoons in Kathmandu, groups of women are protesting at Maitighar Mandala almost every day. Almost all of them lie down on the ground with red paint on their pants. Holding placards like ‘don’t impose a tax on my period’, ‘think more than blood money and ‘period is taxing in itself’, the women and a few men are protesting the rise in sanitary pad tax in the country.

Campaigners argue a sanitary pad should not be considered as a luxury item and asked for a tax rebate. But businesses and importers of the product say the price hike was a result of an increase in tax by the government. But, the government says it has not increased any tax.

Did the government hike the price?

According to the Finance Ministry, the government has been putting a 15 per cent customs tax on sanitary pads since the fiscal year 2012-13. A 10 per cent tax is imposed on raw materials used to make them in Nepal. But, the budget ordinance brought on May 29 changed it to 5 per cent as the government wanted more businesses to make sanitary pads in Nepal instead of importing them.

Regarding the allegation made by businesses, the ministry states it has not increased any form of tax on sanitary pads. The ministry released a statement on September 24, stating some people were spreading fake news and attacking the government without doing due research.

So, who is responsible?

That said, the government has not said anything about the price hike.

After the new budget was passed, businesspersons increased the prices of sanitary pads imported from countries like India, China and Taiwan. Prices have gone up by Rs 10 per packet.

The Ministry of Industry, Commerce and Supplies and Department of Commerce, Supplies and Consumer Protection that should be monitoring this and taking actions against the importers and business have made no comments so far. They have turned a blind eye to this.

How many sanitary pads are imported?

In two months of the current fiscal year (2021/22), 24.5 million sanitary pads have been imported at a cost of Rs 239 million. The government has already pocketed Rs 59.6 million in taxes, according to the Department of Customs.

So, what do the campaigners want?

Even though the government has not increased tax on sanitary pads, it still imposes a 13 per cent value-added tax (VAT) on the product. This is imposed on pads being manufactured in Nepal and imported from abroad.

But, this goes against the government’s National Dignified Menstruation Policy that wants to make products that deal with menstruation cheap and accessible to all. The policy states it wants to change it from a luxury item to a basic necessity item and paves the way for more Nepali companies to produce it in the country. The policy also talks about tax rebates and grants to businesses producing them in Nepal.

“If the government wants to be progressive, it needs to remove the 13 per cent vat too,” says campaigner Radha Paudel.

Dignified menstruation needs to be looked at from multiple perspectives, says Paudel. She says that products like reusable pads, disposable pads, menstrual cups and tampons should be made available everywhere cheaply.

“Sanitary pads that imported are not very sustainable to the environment. The government should also make sure we slowly phase them out and promote pads made in the country,” says Paudel. 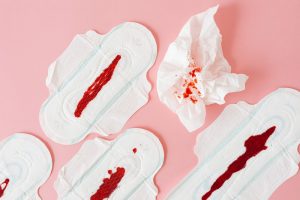 Pad pollution: How Nepal successfully adopted the use of sanitary pads but failed in disposal 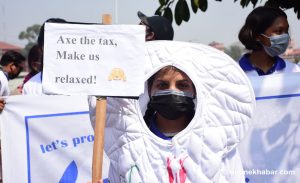 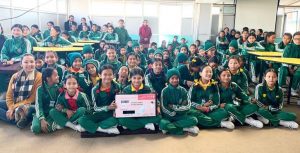