A four-year-old girl was killed in a road accident at Thade of the Rasuwa district along the Pasang Lhamu Highway on Tuesday evening.

The deceased has been identified as Naina Ghale, a resident of Thade in Gosaikunda rural municipality-6 of the district.

According to DSP Devendra Pandey, an SUV (Na 1 Ja 6176) en route to Dhunche from Kathmandu knocked her down, killing her on the spot.

The vehicle also hit other two pedestrians, leaving them severely injured. They are 30-year-old Urja Ghale and eight-year-old Karan Ghale and they are being treated at Kathmandu-based Green City Hospital.

The vehicle fell some 50 meters down from the road after hitting three pedestrians.

Four were travelling in the vehicle during the accident and they are receiving treatment at the Nuwakot-based Trishuli Hospital, it is said. 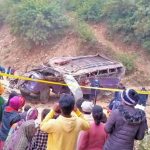