On October 2, Purnima Shrestha and Pasang Lhamu Sherpa became the first Nepali women to reach the summit of Dhaulagiri, the seventh highest mountain in the world. The duo had tried to scale the mountain with different expedition agencies during the spring, but due to unfavourable weather and other circumstances, Shrestha and Sherpa had to cut short their summit bid.

But, on October 2, the duo created history and etched their names in the record books.

“You never know what happens when you’re up in the mountains. Both your next step and breath can be your last,” says Shrestha. “There are times I feel I will not come back. But, I always set a goal before I get up a mountain and the goal is to come back safe.”

Born in Arughat, Gorkha, the mountains never appealed to Shrestha. Growing up, she barely saw them from her village. But, as time went by, her love for the mountains grew.

A photojournalist by profession, Shrestha got to travel all over Nepal. In 2017, she went to the Everest Base Camp to cover the Everest Marathon. It was then when she was pulled towards the mountains. Talking to foreigners who had come to climb the mountain, she understood why they came to Nepal. It was then that she decided that she too would climb.

Today, she is on a mission to climb all eight-thousanders in the world despite several challenges.

“I wanted to climb Everest. But, everyone suggested I opt for a smaller mountain, which is why I went to Manaslu in my home district first,” she says. After summiting the eighth highest mountain in the world, in 2018, she started dreaming about Everest.

The dream became a reality as she reached the top of the world on May 19, 2018. After Everest, she set her sights on Ama Dablam, also known as ‘mother’s necklace’. Determined to summit one of the most technical mountains in Nepal, Shrestha reached the summit of Ama Dablam on November 10, 2019.

“It always looks easy to climb a mountain from afar, but when you get up close, you get a bigger picture of how hard it is going to be. Every step is important and if you make one mistake, you might die. If you look at it, if you win, you’re a summiter; if you lose, you’re dead,” she says.

She says mountaineering is like playing with fire. To her, this is like romance but not with a person, but with death. She says there are times she questions herself why she is up there. Taking loans of millions of rupees, she thinks she is going up to meet death. But, her day is yet to come as she continues to surprise herself with one summit after another.

Mountaineering gives her added energy, she says. After each expedition, she comes back with added zeal and enthusiasm. She feels alive.

“After coming back, I always feel nothing in this world is impossible. All you have to do is keep focus and you’ll be sorted for life,” she says.

Still on a mission

She wants to climb one mountain every year. That plan was almost halted due to the Covid-19 pandemic, but she did not let it affect her as she reached the top of Annapurna on April 16 and Dhaulagiri most recently.

“I want to climb all 14 eight-thousanders. They appeal to me and call me,” she says.

She has been receiving some sort of help though. The Gandaki provincial government and officials from her local government helped her out when she went climbing Annapurna I during the spring as she looks for more sponsors for the remaining mountains.

“It’s quite expensive to go on an expedition that is why I get really sad when I do not reach the summit,” she says.

That was what had happened in the spring when she tried to get to the summit of Dhaulagiri. Due to bad weather, her team had to return from the mountain and end their summit bid. That was a kind of reality check, she says.

“We were lucky this time around. The weather was on our side as we reached the top,” she says.

Magar is an Onlinekhabar correspondent, reporting from Pokhara. 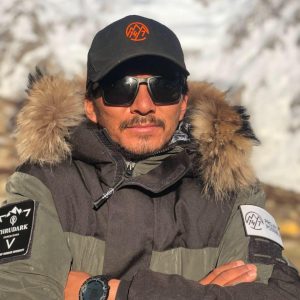