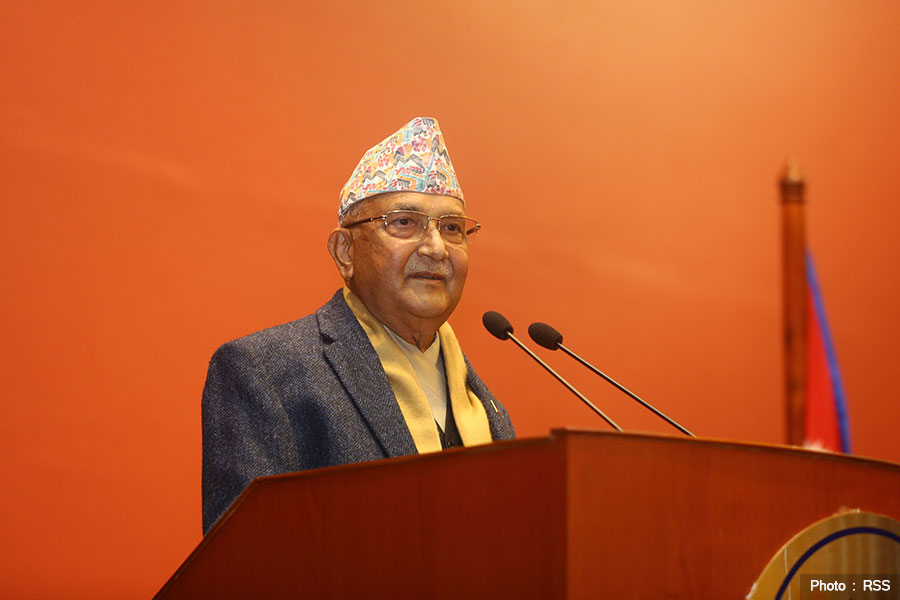 On January 10, Prime Minister KP Sharma Oli during his more than an hour-long address to the National Assembly defended several measures taken by his government including the dissolution of the House of Representatives. Highlighting his government’s achievements he said, “Never before had the works progressed so expeditiously. The facts and figures speak for themselves.”

But some of the claims Oli made during his speech were either misleading or false. South Asia Check fact-checked three of his claims.

“700,000 earthquake-damaged homes were built and distributed to the people.”

Prime Minister Oli has repeatedly claimed that his government has made significant progress in post-quake reconstruction. But, this claim is misleading.

According to the National Reconstruction Authority (Prime Minister Oli himself is the chair of the steering committee of the authority), the number of homes completed so far is 559,139. Earlier also, we had fact-checked this claim.

Prime Minister Oli claimed the government distributed the homes to the people. In reality, the government provides a housing grant of Rs 300,000 each to the earthquake-affected people. The grant is released in three instalments to the beneficiaries who comply with the government’s reconstruction guidelines. The grant is inadequate and can support only a part of the housing reconstruction. The earthquake-affected people themselves made up for the shortfall to build the homes. So, Oli’s claim is misleading.

“We have made arrangements for a dry port in Chandani-Dodhara.”

Oli said this while claiming his government has expedited various projects in the Sudurpaschim province. The prime minister occasionally cited Chandani-Dodhara as an example while claiming that Nepal-India relations have improved.

But, the dry port project in Dodhara-Chandani municipality across the Mahakali river has remained a work-in-progress for almost a decade now. According to a recent report in The Kathmandu Post, the World Bank had conducted a feasibility study for the construction of a dry port at Kanjabhoj in Dodhara- Chandani municipality around ten years ago. In 2016, the Nepal Intermodal Transport Development Board under the Ministry of Commerce had conducted another feasibility study for the project. A technical study, led by Prakash Dahal, a joint secretary at the Ministry of Commerce, submitted a report to the government last October. The panel recommended constructing the dry port in the municipality’s Mayapuri community forest area. A master plan is in the works and it will take two years to complete a detailed project report and environmental impact assessment, according to The Kathmandu Post.

Therefore, Prime Minister Oli’s claim regarding the project, which is 10 years old but still remains only on paper, is misleading.

“Everyone knows how much progress has been made in the education and health sectors. Everyone is well informed about the current school enrolment rate. They also know that the school dropout numbers have gone down. The girl to boy (school enrolment) ratio has become even.”

In his address, Prime Minister Oli claimed that the school enrolment rate for girls has increased and is now almost equal to that of boys. He made the claim while talking about his government’s achievements over the past three years. In fact, several initiatives on gender equality in Nepal’s school education over the past several years have helped in narrowing this gap. Educationists identified the girl children’s lack of access to school education as the main reason for their low enrollment. The government’s economic survey reports show that the number of girls enrolled in schools has already surpassed that of boys. And, this happened even before Oli came to power.

The article first appeared on the South Asia Check.