Newly appointed officials of various constitutional bodies after their oath, in Kathmandu, on Wednesday, February 3, 2021.

The KP Sharma Oli-led government has appointed officials of various constitutional bodies including the Commission for the Investigation of Abuse of Authority and the National Human Rights Commission without a parliamentary hearing.

The officials recommended by the controversial meeting of the Constitutional Council on December 15, 2020, were sworn in at the President’s Office, Sheetal Niwas on Wednesday morning.

Although Chief Justice Cholendra Shamsher Rana had tried to block the appointments by refusing to participate in the council meeting yesterday, he administered the oath today, it has been learned.

Sources say 32 officials including five chiefs of constitutional bodies took the oath of office and secrecy. The government has not revealed the names officials as of 12 pm.

The President’s Office Secretary Bhesh Raj Adhikari says the oath ceremony has already been over.

Earlier, on December 15, 2020, a meeting of the council attended by Oli, Rana and National Assembly Chairman Ganesh Prasad Timilsina had recommended officials for various constitutional positions. Apparently, in his deliberate efforts to avoid the parliamentary hearing required for such appointments, Oli had forwarded the names to the Parliament Secretariat only after dissolving the House on December 20.

The House Speaker Agni Prasad Sapkota had sent back the nominations to the council on Sunday, which Timilsina had objected to.

But, Oli was planning to recommend their appointment without the hearing as the laws have it that the nominees can be appointed if the hearing panel cannot make any decision within 45 days of the submission of the names.

This time, however, it was not that the committee could not make a decision, but the committee was absent there as the House was dissolved. Therefore, senior advocate Dinesh Tripathi has filed a writ petition at the Supreme Court on Tuesday against Oli’s preparations to appoint the officials unconstitutionally. 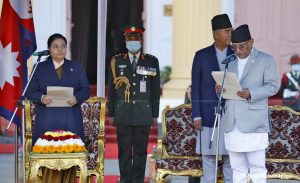