Shakya’s statement comes around three weeks after the beginning of the campaign. Initially, it was reported that the ruling Nepal Communist Party, which Shakya belongs to, was reluctant to support the campaign.

The responsibility to restore and protect religious, cultural and historic importance of Tundikhel has fallen on the metropolis, the metropolis mayor tells Rastriya Samachar Samiti, promising to do his best to bring back Tundikhel, a witness to various political changes of the country, to its past condition.

Shakya, however, urged the activists to keep the campaign away from politicisation.

“Debris from Durbar High School, Dharahara and Bir Hospital damaged in the 2015 earthquake has been deposited in Tundikhel. It will be empty once the debris is removed,” he said.

“The metropolis has launched a campaign to free the city of pollution and make it green. During Chinese President Xi Jinping’s Nepal visit recently, general repairs took place in Tundikhel so dust emanating from deposited debris would not come up. Rumours are like the metropolis has permanently set up a pick-and-drop place for vehicles inside Tundikhel, which is not true,” said Shakya. 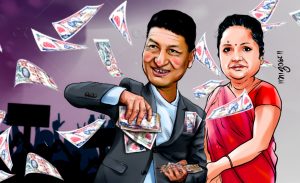