Preparations are underway for the voting for the new leadership of the Nepali Congress, in Kathmandu, in December 2021. Photo: Chandra Bahadur Ale

The Nepali Congress is holding a vote for the new leadership of the party for the next four years on Tuesday morning as per the schedule of the party’s ongoing 14th general convention.

The election will be held at Rastriya Sabha Griha at 8 pm tomorrow.

It is highly likely that Deuba and Koirala will be ahead of other candidates whereas Nidhi and Singh will also get some votes. Gurung’s candidacy has been considered just symbolic to show his presence to signify the emerging generation in the party. 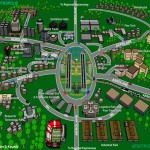