Nepal Police personnel guard the venue set for the opening ceremony of the 14th general convention of the Nepali Congress, on Friday, December 10, 2021.

The opening ceremony is shortly beginning in Bhrikutimandap of the capital.

SSP Basanta Bahadur Kunwar says personnel from Kathmandu, Bhaktapur and Lalitpur districts have been mobilised for the security of the event.

Police say many personnel have been mobilised in civvies whereas additional CCTV cameras have been installed in different places of the valley.

Meanwhile, traffic police in the valley are facing a tough time throughout Friday as the event has thrown the traffic management into shambles. The number of vehicles in the valley has significantly increased from early morning today, informs Sanjeev Sharma Das, the spokesperson of the Metropolitan Traffic Police Division. 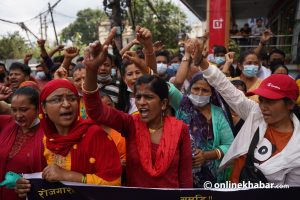