Nepal’s space flight dream: Possibility can’t be ruled out, but how and when are more important questions Some two weeks ago at the Tangal Secondary School of Kathmandu, Sushil Dev Bhattarai conducted an interaction on the possibilities of human space flight for students in grades seven to nine. The founder CEO of NEAR Aerospace, Bhattarai conducted an introductory class about astronautics and even showed a ‘rocket’ that was made in Nepal from scratch. Seeing this, he shares that not just students but teachers there were also impressed and excited that a Nepali rocket would one day make it to space flights.

When Abhas Maskey went to public schools in Guncha and Melamchi of Sindhupalchok, he conducted a similar interaction with students there. He asked them what they wanted to do. To Maskey’s surprise, they said they wanted to be bus drivers.

“The interaction felt like a reflection of our society where children were aspiring to be what they were seeing [bus drivers]. But, their limited vision for the future bothered me. And I felt that we had to give our future generation a new dream. Space technology can be one,” says Maskey, a co-founder of Antarikchya Pratisthan Nepal, an organisation willing to work in the sector of space technology in Nepal.

Nepali people have always dreamed of space flights, being astronauts and taking the Nepali flag to space, more importantly from Nepal. But, can Nepal realistically bring their dreams to life?

The answer contains many layers.

The road to space

If you ask ‘Can a Nepali be an astronaut?’, the answer is a resounding yes. But, the question has two-fold answers and one has to understand the definition of an astronaut first. مراهنة كرة قدم

Anmol Mittal, the president of NESRA, informs, “You can go to space on a commercial rocket, cross the 100 km (aka Kármán line) threshold and come back. Such flights can be privately boarded with SpaceX [a week in ISS will cost USD 65 to 70 million], Virgin Galatic [USD 450,000 for one trip] and Blue Origin among others.”

However, after Jeff Bezos travelled to space in July last year, the Federal Aviation Administration (FAA) changed the definition of an astronaut and now any person on a commercial space flight will be a commercial astronaut or space tourist.

Now, to be an astronaut per se, one has to conduct activities or research or contribute to human space flight safety. “This has made things rather difficult for Nepalis as the country does not have its own space agency or launchpad whereas other countries do not send them as astronauts in space over their own citizens or over security protocols,” Maskey adds.

Given that the space flights on foreign rockets are expensive, one might also ask, ‘Can a Nepali go to space in a Nepal-made rocket?’ That also is a yes.

“So far, Nepali people have made and tested model rockets here. But, they are yet to make rockets that can carry humans. العاب لربح المال الحقيقي On a positive note, Nepal can build infrastructures to make the rocket parts here in years to come, but testing and launches will need to be conducted in collaboration with other countries like India, Thailand and Russia. The same is true for NepalSat-1, picosatellites and SastoCube that have been built in Nepal,” says Maskey, highlighting that rockets have a higher failure rate and, hence, can be an expensive affair.

But, can they go to space from Nepal? That unfortunately is a no, given Nepal’s geographical features and present internationally-followed safety regulations for the construction and operation of a launch site.

Having said that, there are many things that Nepal can do for space flights, starting with education, satellite building and training mechanisms. Nepal offers extreme geographical conditions to conduct endurance training and has space to set up temporary or permanent training facilities to train aspiring astronauts with analogue missions.

Maskey shares, “We can set up a gravity-controlled room where we can create zero-g (gravity) and non zero or close to zero-g simulations for training purposes. It is also harder to achieve artificial zero-g scenarios but if we can do that, that would be best. Many also do the training underwater, so that is another possibility.”

In fact, it has already been conducted in 2018. “We conducted two analogue missions in Nepal, as a country partner, in collaboration with other international stakeholders. The missions were held in Mustang and they focused on remote medical services, manning vehicles with virtual reality to improve human-computer interactions. Participating astronauts were from the US, Australia and the UK who spent some two weeks here,” shares the NESRA founder.

“Ideally, the base accommodates four to six people on a space flight and has a renewable and sustainable power supply with enough water system and resources. Depending on the resources, purpose and duration, we can scale it as needed too,” he adds.

Yet, Mittal adds that there is a long way ahead before Nepal can set up its own setup here and start regular space flights. Garnering a budget and justifying the reason for the training might also be a problem. The hurdles are the same for Nepal’s overall space dream, adds Maskey.

“The progress will happen the day we can show there is a direct impact of space flights and it is a necessity. Today, we have not even reached level zero towards our dream to put a Nepali in space, we are only reaching zero in terms of satellites. So, it is an arduous journey. And even when we do, we have to realise it will be limited.”

No matter how limited it will be, some efforts have already begun towards that end.

One such stakeholder is Maskey, who is working on Vision 2050 to put the first Nepali astronaut in space by 2050. But, he says that the journey is arduously long with an extensive need for groundwork. “There are many hurdles on the ground that we need to eliminate first. Also, we have many starting points, hence, we are experiencing more resistance than we had imagined,” he says.

“For the very step of our mission, we are working on the vision building and we are doing it through the means of satellite. We do not just make them familiar with the concept but also train them to make use of satellites in an extreme form of engineering for research, surveillance and payloads. Satellites are our entry point to space and if we get a hold of them, we can turn our dream of sending Nepali on space flights into reality too,” he shares.

He believes the first Nepali astronaut to do space flights will emerge from the next generation of dreamers, so he is focusing on the younger generation. “In the school-level children, we recently conducted a PaperSat art competition on paper cubes, a replica of SastoCube, and painted their vision on them. On the other hand, they are getting familiar with satellites and learning the technicalities under our TinkerLab programme.”

Expanding on his plan for an analogue setup, Mittal says they have plans to hold a nationwide design competition where they call out for plans, based on which, they will set up an analogue base in Nepal. “We will pick the top five ideas and connect them with international mentors to mature the idea. The next step will be to do the feasibility study, design the price model and get investment to build the base.”

Meanwhile, Sushil Dev Bhattarai is now working on Vision 2024. “We have been working since 2018 and are closely working with Pulchowk Engineering College students. We built a 100km rocket called Arambha. It is a 6 to 12-foot long founding rocket made with a majority of 3-D printed parts, made in Nepal.

Stakeholders agree Nepal needs to do a lot more if it really wants to realise its space flight dream.

“Space is still a fantasy and it will take us at least 15 years to make progress,” says Sushil Dev Bhattarai. He says, though by 2024, it is only possible to put rockets only, Vision 2050 is very promising to put a Nepali in space. العاب فان

Maskey adds, “Training, capacity building or showing prototypes will also be a good way to show that Nepal is ready for space flights, rather than waiting for or asking somebody else to do it for us.” If Nepal really wants to make progress, Maskey suggests the stakeholders need to act today, work together with their expertise and share responsibilities

Policy-level lobbying for a space policy in Nepal has started in 2007, and as a result,t Nepal has Science Innovation and Technology Policy and Satellite Policy. “But, we need a separate space policy now to guide all integrated programmes, space agencies, and international cooperation for space flights.”

The Nepal Astronomical Society (NASO) Chairman Suresh Bhattarai says, “A lot of work and collaboration has gone into creating the environment for creating satellites here. But, the government is always worried about the monetary problem and it puts a halt to much progress. Efforts have been made continuously to form a consensus among the stakeholders too.”

The NASO chairman says the Ministry of Education, Science and Technology has established a Space and Emerging Technologies Section owing to the advocacy.

Santosh Sharma, the chief of the section, says, “Sending astronauts on space flights is also not a priority for us now. Rather, our priority is to expand education on aeronautical engineering, space observation, weather forecasting and communication technology through satellites and produce skilled human resources within the country.”

“In the longer run, the government is looking forward to setting up Atarikshya Adhyayan Kendra, a national research agency. Efforts are underway, but details are still yet to be ascertained. it will be used to reduce costs and expand local network and communication as well as employ locally produced human resources.” 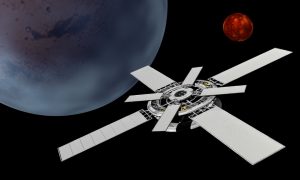