Minister for Physical Infrastructure and Transport, Raghubir Mahaseth, has informed that floods and landslides damaged 45 bridges along various roads across the country during the monsoon this year and the government needs Rs 473.4 million to repair them.

Speaking at a meeting of the Development Committee in Parliament on Sunday, the Minister said the federal government was planning to repair them at the earliest. He said the ministry did not begin the repairing to check if local and provincial governments would take any initiatives, but now would not wait for them any more.

He, however, maintained that the federal government would coordinate with the two other tiers of government in the process.

Meanwhile, the committee directed the government to clarify which government–federal, provincial or local–would be responsible for such tasks.

The committee also directed the ministry to complete the repairing immediately for now as a failure to do so would affect travellers during Dashain, Tihar and Chhath festivals. 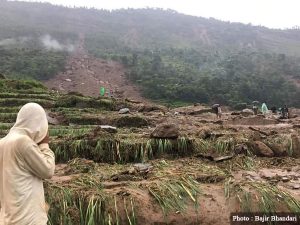