Three persons missing after a landslide at Rumko Taming, Malika rural municipality-2 of the Myagdi district in Gandaki have been found dead.

After this, the death toll reached five.

All the deceased belong to the same family. They have been identified as Gham Bahadur BK, his wife Ram Maya, sons Nabin and Rajan and daughter Asmi.

Two persons died when a landslide buried two houses at Rumko Taming, Malika rural municipality-2 of the Myagdi district in Gandaki in the wee hours of Tuesday. Three others are missing.

The victims have been identified as Rajan BK and Nabin BK, sons of Gothe BK. Gothe BK and Gham Bahadur BK’s houses were buried.

Meanwhile, Gothe, his wife Gori are injured. Gham Bahadur, his wife Ram Maya and their daughter Roji are missing and locals have launched a search operation. 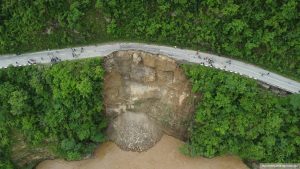