Battisa powder: Know everything about the mixture of 32 herbs given to new mothers in Nepal Battisa powder is a mixture of 32 locally available medicinal and herbal plants. It consists of important herbs that are useful for women’s health. It is used in sutkeri gudpak, a very famous dish especially made for pregnant and lactating women. Not only this, it is beneficial to the women who have problems with white discharge, excessive bleeding, pain in the lower abdomen and those who suffered a miscarriage.

Nepal is rich in different natural and wild herbs and plants that are locally available. These herbs are used at home, and they also help people treat many diseases. This area of medicine is known as homoeopathic or ayurvedic medicine. Even before modern medicine, people including child-bearing women relied on herbal medicines.

Hence, if you have heard of or purchased ‘battisa powder’ but do not know what goes in it, here is a list of 32 herbal medicines, each of which has its own nutritional and medical value. You can use these herbs separately as well.

In Sanskrit, amala is known as adiphala and amalaki and it is called gooseberry in English. It is a small green round fruit which can taste a bit sour. It is fully packed with vitamin C and it has great nutritious values. Due to its antioxidant factor, it increases immunity power and also has antibacterial and anti-inflammatory properties.

In Sanskrit, it is arjunah or kakubh. All over the world, it is known as arjuna. This bark of the buttressed trunk is used for medicinal purposes. It strengthens and tones the heart muscle and helps in the proper functioning of the heart, making it one of the spices of the battisa powder.

Its English name is winter cherry. In Sanskrit, ashwagandha is known as varankarni. Its roots, leaves, fruits and seeds are used for medicinal purposes and are used to reduce swelling, lower blood pressure, blood sugar, and manage stress and anxiety. It also helps fight diseases by boosting immunity.

The herb is also known as vidangah or vellah. Its English name is embelia. Its fruits are used for medicinal purposes. It relieves headaches, haemorrhages and insomnia. As one of the spices of the battisa powder it aids new mothers to recuperate.

Aksha or anilaghnaka is another name of barro. Also, it is scientifically called Belliric myrobolon whereas bustard myrobolon or bedda nuts in English. The fruits are used as medicinal herbs and are considered to be a great supplement of vitamin D and calcium for the elderly, and women who are pregnant or breastfeeding.

It is called bilva or shreephal in Sanskrit and is widely known as wood apple or Bengal quince in English. Its roots, leaves and fruits are used for medicinal purposes. Its juice also serves as a delicious drink. It has a natural healing property that provides instant relief from different health issues. It helps in constipation, diarrhoea, indigestion, ulcer, piles and reduces inflammation.

Bhringaraja is commonly called tekaraja. In English, it is called trailing eclipta. The whole plant is used for medicinal purposes. Its antioxidant part helps in deep cleansing the body tissue which is why it is used in the battisa powder. It helps in immunity building and regular bowel movement.

Its Sanskrit name is gokshura or ikshugandha while it is caltrops in English. The whole plant is useful for medicinal purposes. It gives relief to urinary disorders and is said to be useful to boost sexual health and stamina. It also aids in digestion and dismisses pain.

Its English name is chebulic myrobolon or black myrobolon. Its seed is useful for medicinal purposes. It helps with nervous irritability, improves appetite and helps in case of indigestion. Mixed in battisa powder, harro helps the new mothers a lot.

This is a rather common herb known by all as cinnamon or traditionally known as tvak or chocham. Its bark and oil are used for medicinal purposes as they have antiviral, antibacterial and antifungal properties. It balances the insulin hormone and improves gut health. One cup of tea with cinnamon helps fight off infections and reduce premenstrual syndrome (PMS) and menstrual cramps.

It is known as box myrtle or bayberry. Its bark is useful for medicinal purposes and helps in headaches, toothache, ear pain, eye problem. Because of its medicinal qualities this is used in the battisa powder. Meanwhile, the fruit of this tree is also popular among Nepalis as a snack.

Kausso is known as atmagupta or kapikachhu. In English, it is known as common cowitch and scientifcially as Mucuna pruriens. Its stem sap is used in helping improve sleep as it is said to induce deep sleep. It also helps reduce body fat and reduces wrinkles.

Its English name is east Indian arrowroot, zedoary whereas scientifically it is known as Curcuma zedoaria. This is a perennial herb and its dried rhizomes are used for their medicinal properties. It manages the symptoms of cough and cold.

Amritavalli or guduchi is another name of gurjo and is known as heart-leaved moonseed in English. This herb has gone viral on every social media platform due to its benefits in fighting with Covid-19. Its stem, leaves and roots are useful to fight off several diseases. This herb helps to treat heat exhaustion or fever and jaundice, controls blood sugar and boosts immunity.

It is known as cumin in English. Its fruits and seeds are used for medicinal purposes. It is a great remedy for stimulating milk production and rightfully so it has been mixed in the battisa powder. Its seeds are packed with iron which helps the new mother. Cumin is also a common kitchen spice used for taste and the health benefits packed into it.

Yastimadhu is the Sanskrit name of jethimadhu. In English, it is known as liquorice root. Its root is used for medicinal purposes. It is a traditional herb used to treat respiratory problems, obesity, skin infection, liver disorders, gastric problem, hormonal regulation, joint pain and many more.

Jwaano is the herb that we can find in every Nepali kitchen. Ajmoda or yavani is the word that is used for jwaano in the Sanskrit language. It is also known as ajwain or lovage. Its fruits and seeds are very beneficial for medicinal purposes. It helps not only in bloating and gas problems but is also a therapy for pain and swelling of the lower urinary tract diseases.

In the Sanskrit language, it is known as awarsatawari or abhir while its English name is asparagus. Its tubes or stems are used for medicinal purposes. Kurilo is an excellent source of folate which helps during pregnancy. It also increases the breastmilk to feed a child.  It also helps treat urinary tract infections, helps in joint pain and hormone balance in women.

Traditionally, it is known as kachnar or kovidarah. In English, it is known as mountain ebony. Its roots and bark are used for medicinal purposes whereas people also consume its flowers. It is used to cure bleeding, haemorrhoids, cough, diarrhoea, dysentery, heartburn, indigestion, malaria, and skin disease.

It is also known as manjistha or yojanavalli. Its English name is (common or Indian) madder. People use its roots to help in the treatment of menstrual disorders, urinary tract disorders, blood disorders, bruises, jaundice, and spleen disorders. It is also works great for new mothers so, it is mixed in the battisa powder.

Widely known as black pepper, this spice is also known as marich or maricham. Fruits of this plant help improve blood sugar levels and lower cholesterol levels. It is highly used in the Nepali kitchen as well as it has anti-inflammatory properties.

Also known as ngapushpar, this is commonly known as the ironwood tree or Indian rose chestnet. Its bark, leaves, flowers and oil have great beneficial properties. It is used to heal wounds as it promotes blood flow.

Scientifically known as Cyperus scariosus or Cyperus pertenuis, this herb helps in the healing purpose after delivery to the child. It has many anti-hyperglycemic, anti-nociceptive, hepato-protective and anti-fungal properties. For its therapeutic properties, it has been mixed in battisa powder.

In Sanskrit, this is called pasanve whereas, in English, it is known as rock foil coleus. Scientifically it is known as Bergenia ciliata. Its rootstock is used for medicinal purposes. It helps manage ulcers and relieves coughing. A paste on its skin can also helpp cure boils and inflammation given its anti-inflammatory property.

It is also known as granthika or magadhi but is widely known as long pepper. Its roots and fruits are used for medicinal purposes as it helps in heartburn, digestion, bronchitis, intestinal gas. Long pepper is also used as a spice, for seasoning. Mixed together with other herbs, in battisa powder, pipala is good for milk production in lactating mothers.

People know it as punarnava or sothagni. In English, it is known as spreading hog wood and scientifically called Boerhavia diffusa. The whole plant has a medicinal purpose as it helps in anaemia, improves eyesight, gout and manages heart problems.

It is also known as satawari or abhiru. In English, it is known as wild asparagus. Its tubers have a beneficial purpose. It helps in healthy pregnancy outcomes. It also improves digestion. Bankurilo has folate, vitamins A, C & K. and Potassium.

Its English name is butterfly pea. Its seeds, roots and root barks are the herbs that are used for medicinal purposes. These are rich sources of antioxidants. It minimises the damage to the cells of the body, reduces fatigue and slows down the anti-ageing process. The herb is also considered a good herb for good hair health.

Its name is mocha or kantakdruma and, in English, it is known as the red cotton tree. It is used for healing wounds and to stop bleeding. Its flowers are astringent and good for holera, fractures, toothache, coughs, urinary problems, influenza, skin troubles and haemorrhoids.

Adrakam is the Sanskrit name of sutho. It is famous as dry ginger all over the world and its rhizome are used in the mixture. It helps fight germs, period pains and helps in bloating. Ginger has a great source of antioxidants which helps to increase immunity power and fight common cold, allergies, asthma, cough and rheumatism.

Known as tamalpatra in Sanskrit, it is also called Indian cassia lignea in English. Its roots and leaves are used for medicinal purposes. Tejpat or bay leaves can be used as a stress buster and a natural wound healer. It also improves digestion and is also heart-friendly.

Thulo okhati or budo okhati is known as Astilbe rivularis, scientifically. Its rhizomes are used in the battisa powder which are given to women during their pre and post pregnancy period. It is highly beneficial for the new mom to recover from body aches. 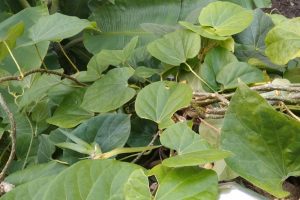 Gurjo: This vine has been household name amid Covid-19 pandemic. What is it anyway?