From cauliflowers to goat milk: The story of Nepal’s pioneering cheese factory

One wintry morning, a couple in their mid-twenties prepare their load on their dokos (conical-shaped dry bamboo strip hand-woven baskets) laden almost to overflowing with cauliflower from their farm. The man carried a bigger basket and the woman a slightly smaller one. They heaved the load onto their backs and started from their home in Chitlang on the steep daunting climb to the Chandragiri ridge, the wooded hill still shrouded by the early morning fog.

That happened to be the ancient trail (before the Tribhuwan Highway came), which started from Thankot and traversed places such as Chitlang, Markhu, Kulekhani, Chisapani Gadi and finally the last point,  Bhainse, where the travellers took a ride in a lorry to Birgunj. The couple was on their way to Kalimati, Kathmandu (21-22km), to sell their produce. After a five hours gruelling walk with the heavy loads on the dirt trail (the present jeep track was not built then), they arrive at Panighat, Thankot and retire for the night there.

At first light next day, the couple head out for Kalimati to sell off their cauliflowers and return the long journey back home. Strange as it may sound, the man’s doko weighed a whopping 80 kilos while his wife’s, a mere 45kg woman then, (she weighs almost 80 kilos now) tipped the balance at 55 kilos! That couple happened to be none other than Ashok Kumar Singh Thakuri and his wife, Rita Singh Thakuri–the present owners of the goat-milk cheese factory at Chitlang, Makwanpur District. They were into vegetable farming in the late 1980s until early 1990s before going into cheese-making. The story behind the goat-milk cheese factory in Chitlang, in fact, dates back more than 20 years, even before Ashok and Rita had the faintest idea about it. Sometime in the late 1990s, a French couple, Gerard Denis and Josette Denis, visited Nepal. They worked as agriculture teachers back in France. They came to spend their holidays in Nepal but after seeing the abject poverty in the rural areas, decided to help the village people mostly dependant on subsistence farming by introducing cheese-making from goat milk. The idea took shape and the French couple dedicated themselves to make it happen–a Herculean task indeed.

Subsequently, with the assistance from a French NGO based in Northern France, La Maison des Himalayas, a Dairy Goat Project (DGP) was initiated. The INGO was involved in Nepal to alleviate poverty in the rural areas of the country. The objectives of DGP were to develop goat breeding, production of goat milk and cheese-making. DGP was further helped by the Institut D’Hazebrouck, France–an agriculture school for dairy farming. The village selected for the project was Chitlang, Makawanpur district. The partnership was expanded: first with the DLS (Department of Livestock Service of the Ministry of Agriculture of Nepal) and then with Heifer International, France.

The fieldwork started in 2000 but it was only in 2004 the project got the new impetus after the French Embassy based at Kathmandu offered help to grant funds. In 2002 the factory building was built. As further assistance, French engineering students lent their hands to the project by visiting Chitlang from 2004 to 2007. It was now time for a local farmer to learn the process of cheese making. Among many aspirants, Ashok Singh Thakuri, a wiry little man was chosen as the candidate for his resolute personality and leadership qualities. In 2001 he visited the goat-milk cheese factory, La Cevriette, located at Pas-de-Calais, France for a month-long training. The training, however, lasted only 22 days and he was back home. On November 22, 2004, Mr Michel Jolivet, the then French Ambassador to Nepal inaugurated the cheese factory and a trial production was made. It came through with flying colours. Initially, 25 farmers were involved in this project and the factory was run as a cooperative under Ashok Singh Thakuri’s leadership. Quite a number of women too were in the organisation. Each member was also given a goat as a gift by the French ambassador.

The modest production started with both soft and hard cheese. The main hurdle the factory faced was marketing. Star-hotels and posh restaurants in Kathmandu were approached but the response was lukewarm. Most of them were even sceptical about its authenticity. “Goat-milk cheese produced in Nepal, really? — was the kind of sarcastic comments I got from some hotel managers,” reminisces Ashok.

In Nepal goat is reared primarily for meat purpose and the milk from them is not marketed like cow or buffalo milk. So, the next problem the cooperative faced was the collection of milk sufficient enough to meet their requirement. The supply of goat milk all depended on increased milk production, for which an efficient breeding of goats was required. At the behest of Ashok, the French NGO again came to the rescue. French volunteers were sent to effectively market the cheese production and help improve the collection of goat milk.

More and more farmers were encouraged to rear goats and were trained to manage proper breeding. “I was shocked to watch the once arrogant hotel managers in Kathmandu completely change when I was accompanied by the French lady volunteer. They even promised to buy our cheese. The colour of skin made so much difference,” Ashok almost fumed indignantly.

In a year’s time, the state of the factory was far from satisfactory though. For three years, Ashok devoted himself to sustain the factory, which was already in a shaky condition. The cooperative was running into heavy losses because of poor market, insufficient goat milk collection, and lack of funds. Soon, it looked the project was teetering towards it last legs.

The cooperative members instead of coping with the problem and uniting to face the challenge and restore order started backing off. This came as a big shock to Ashok who had put in every ounce of his energy and effort to run the factory, the only in the entire country. It was his dream project. The non-cooperation from the cooperative members dashed his hopes. The co-operative went into liquidation and the production of cheese halted.

Ashok did not admit defeat, though. Despite all cards stacked against him, he was determined to pull this project through on his own. His wife, Rita, was equally resolute and the couple registered the factory in their name and struggled hard for three long years to sustain the factory and keep it alive. They had to start from scratch, a daunting task indeed. The couple started goat-breeding with a few heads and built an outhouse to rear them. They went from door to door around the village for the collection of goat milk and motivate the villagers to do goat farming. Cheese making was Ashok’s forte but milk production and supply was equally important. He travelled to India and brought a cross-breed of Sannen goat (a Swiss breed recognized as the most productive domestic goat, which gives more milk than the local breed). He even applied to the government to import the pure breed from Switzerland but his request was turned down. A pure-breed Sannen produces 4 to 5 litres of milk daily while the cross-breed can produce one-half to two-half litres a day. Other breeds like the long flat droopy-eared Jamuna-pari (Indian strain), and Khari-bakhra (local strain) fare poorly and are less viable for obtaining optimal milk production.

It was an epic struggle for Ashok and Rita to revive the factory literally doomed to failure. They sold off some of their hard-earned lands and stabilized their financial condition. Gradually, they mobilised their marketing strategy, added more heads to their goat farm with cross-breeds, maintained better hygiene at the factory and devised a more efficient way of collecting milk from the local farmers. For the iron-willed couple, there was no turning back and no looking back. And surely after three years of hard work, it paid off. Eventually, Ashok and Rita’s dream was fulfilled–the factory survived.

“Today, the factory produces five to six kilos of soft cheese, which are easily sold in the market. In fact, if I were to produce 12 to 15 kg of cheese a day currently, marketing it would not be a problem,” Ashok confided to me confidently. The factory is running on its 12th year today. When Chitlang’s name is mentioned, the goat-milk cheese becomes a spontaneous issue. Every year the factory attracts foreign as well as domestic tourists. Colleges and schools from around Nepal, conduct study tours to the factory.

Both Rita and Ashok are quite content with their work at the factory. Ashok had the opportunity to visit a number of European countries such as France, Germany, and Belgium at the invitation of the goat-milk cheese factories from those countries. Recently, a Belgian team completed a documentary film on their factory at Chitlang.

After the interview, my companion Sayeet and I  took a survey of the cheese factory and the goat farm. We had to take off our shoes, don a cap and change into a gown before entering the factory. As we surveyed the factory, Rita explained the cheese-making process in detail. The soft cheese sells for Rs.2, 500.00 per kilo and the hard for Rs. 3,500.00. The soft cheese can be stored in a refrigerator for two months, the hard cheese for two years.

“So, are you happy with the present status of your factory?”I asked after the visit to the factory.  “Yes, my husband and I are satisfied with the progress we have made in those 14 years. Our dreams have finally come true,” remarked Rita Singh Thakuri and gave me a demure smile. “You once weighed 45 kilos when doing vegetable farming. Now, you seemed to have doubled your weight. Is it the goat milk or the cheese that has made you put on so much weight?” I commented jokingly to Rita. Her grin suddenly broke into laughter. 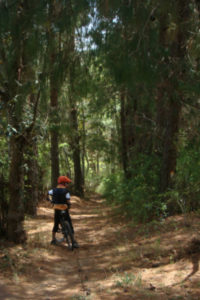 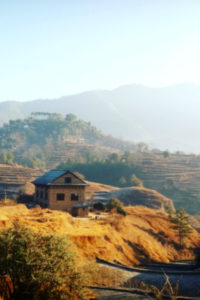