Yes, curiously, it also came to be known as the ‘Rolls Royce’ trail as the first ever automobile (in 1934), and subsequently, others owned by the Kathmandu’s royalties, foreign dignitaries and aristocrats were transported by this route–not on wheels but shoulder-borne by porters.

The villagers thronged to watch the spectacular sight as the porters carried the car balanced on bamboo poles to the rhythmic chanting of ‘hoste-hainse’ (Nepali rallying cry).

In 1940 porters numbering 60, carried a 1939 Daimler-Benz gifted to King Tribhuvan by the then German Nazi Leader Adolf Hitler. The vintage car is kept on display at the Narayanhity Palace Museum. Yet another antique car, the Hudson Phantom, made by the Hudson Motor Car Company, Michigan, Detroit, USA, and brought to Nepal in the mid-1900s ( believed to be Late King Mahendra’s), is on display at the National Museum, Chhauni.

Some 70 years ago, my nonagenarian mother (93 years old now) walked along this ancient trail, when she was a young woman in her early twenties. She was on a long journey to India and back to meet my late father who was stationed in the Nepal Embassy, Delhi. So did everyone on this trail.

For millenniums, even before the dawn of recorded history in Nepal, the trail was trodden by the traders, pilgrims, royalties, foreign dignitaries, monks and commoners alike because that happened to be the only route that connected the Valley of Nepal (Kantipur/Kathmandu, Bhadgaon/Bhaktapur and, Patan/ Lalitpur) with the Terai plains and neighboring India.

In the mid-1900s, the journey began after a motor vehicle called a lorry shuttled the travelers to Thankot. Afterward, they hit the foot trail to the daunting heights of the Chandragiri hill, which traversed across beautiful villages like Chitlang, Markhu, Kulekhani (a suspension bridge spanned the river then), Chisapanigadi, and the last leg to Bhimphedi. After that, people clambered up a lorry again and left for the terai towns like Hetauda, Amlekhgunj, and Birgunj, the gateway to India.

In 1956, this time-honored beaten path, trodden down for centuries by legions of travelers suddenly turned deserted and a deathly hush fell over the villages along this route. The once bustling settlements turned quiet and isolated . . . like ghost towns. All too soon, the centuries-old dusty footpath over the Mahabharat hills was forgotten and sadly ignored.
In April 2018, Shayeet and I decided to go on a trip to Chitlang, planning to take the return route via Fakhel, and Pharping. We wished to do the ancient Thankot route but as the road widening work was in progress, it was closed for traffic. Instead, we chose the Mata Tirtha dirt road, which climbed to the Deurali Bhanjhyang (the adjacent ridge to Chandragiri) but eventually met with the ancient trail at Kulekhani. We did not foot it like our ancestors did but mountain biked instead.

What with the traffic snarl-ups at Kalanki and convoys of heavy vehicles that seemed to bore down on us, the first leg to Gurujudhara proved tricky, needless to mention the quantity of dust and noxious exhaust fumes our lungs must have inhaled en route. Just horrible! At Gurujudhara, we took a left turn and sighed in relief as we headed out towards Mata Tirtha, a Hindu shrine thronged each year by devotees on the mother’s day. The road though paved was rutted and in a bad shape. The ride began with a steep climb. Save for a few houses and tea shops, the signs of human habitation started thinning out after we pedaled a kilometer uphill. After some time the road turned into an off-road motor track.

We were told that the rest of the forest-clad hill to the Deurali heights (2,100m) would be deserted, so we stopped for tea and snacks. I looked up at the towering forested hill and my heart sank. We had to slug it up to the steep dizzying height without a level ground in between. For Sayeet (only 18 years old) it would be like a fun ride but for me, aged 65, it would be punishing. That’s mountain biking! I was ready to take up the challenge!
With nature

The more we pedaled uphill, the denser the forests got. Tall pine trees spiraled up into the high hills. The lush vegetation appeared like a close-woven carpet of pale green and olive, while a dash of needle wood magenta foliage lent a floral motif to the pattern. The climb continued relentlessly and the going got tougher each second. Even the “granny gear” (the easiest gear) did not help, and I had to dismount at several places, regain my breath and walk the bike. On the other hand, Sayeet took it in stride. “Must be age,” I murmured to myself, my breath coming in gasps.

We stopped now and then to sip water and gaze around. Several spots on the hill offered bird’s eye views of Kathmandu valley—once a fertile bowl, now an untidy clutter of concrete, grey and dull to look at. The sight was pathetic–what with the haze and smog that seemed to smother the life of the valley, once so green and beautiful.
It took us a grueling three hours from Mata Tirtha to crest the Deurali ridge. We stopped for lunch. Lying towards the west, we could see the Chandragiri ridge and the cable car station. The cable-car cabins were moving up and down. The north was overcast, the dull grey cloud denying us a view of the mountains normally seen on a clear day. In favorable weather, both the Chandragiri and Deurali ridges offer a sweeping view of Ganesh Himal, Langtang, Dorje Lakpa, Gaurishankar, and even the mighty Everest.

It was time to hit the trail, as we had not made even half the journey. After Deurali the downhill was a breeze, freewheeling all the way down to Chakhel, a settlement dominated by the Tamangs. We hurtled down past small settlements and were surprised to find the terraced slopes bedecked with cabbages in full flower in an unbroken chain as far as we could see. Wow, it was indeed a pleasant sight! Apparently, the folks around the place seemed highly industrious in vegetable farming. After Chakhel, at Mahadevsthan, we took the right fork on the Pharping-Phakhel road towards Kulekhani. After pedaling down and up for an hour and a half, we arrived at Kalanki, a bunch of teashops perched on a hillside that sharply dropped to the Kulekhani dam and the enormous reservoir that stretched north as far as our eyes traveled–a breath-taking sight indeed. The road to our left dropped to the dam and the right headed towards Markhu. We stopped for tea, a little tidbit and a much-needed respite. It was already four in the afternoon. We soon left for Markhu, seven kilometers away. The Kulekhani reservoir kept us company all the way.

Markhu, a cluster of roadside shops and tea houses appeared quite busy. The landscape around, however, took a dramatic change. We suddenly found ourselves amidst tall, evergreen trees, with the hills around dotted with small houses and terraced fields that dropped to the man-made lake. A picture postcard setting, indeed! The reservoir at Markhu turned into a beautiful wide lake called the Indrasarovar. 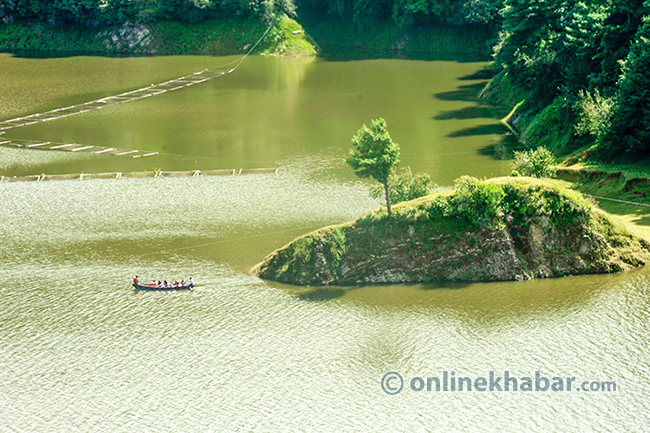 The surrounding was so picturesque that we just could not help stopping, looking around and gazing at the big lake. Awesome! We could see a number of small rowing boats on the lake waters. A handful of restaurants and lodges marked the pleasant hillside.

Markhu is known for a local delicacy too— fresh fish from the reservoir. “People from Hetauda, Birgunj and as far away as Kathmandu, make frequent visits to savor the fish, boat the serene waters and relax,” informed one of the restaurant owners. A village elder told me that the suspension bridge across the Kulekhani river built by Chandra Shumsher, which people crossed while doing the ancient route, was submerged and almost 500 families were displaced when the dam and the reservoir (Kulekhani) was built in 1982-83. The entire villages on its course were inundated.

The bazaar area also boasted an old Victorian style building built by the Rana Prime Minister Juddha Shumsher (1932-1945), which in the olden days served as a rest-house for Rana nobilities and foreign dignitaries traveling to Bhimphedi, the point from where they traveled to Birgunj in motor vehicles.

Then, it started pouring after we had pedaled hardly a kilometer up from Markhu. We had to stop and take shelter under the overhanging eaves of a house. After something like 45 minutes, the rain seemed to slacken. We put on our rain-jackets and resumed our ride. I was afraid that we would not be able to make it before dark to Chitlang because it was still like 7-8km to our destination. The ride got moderate with a few steep inclines thrown in. Phew!
My fears were not unfounded.

The shadows lengthened as the sun went down and darkness soon crept in as we sped past tiny settlements. Lights started appearing in the distance. We fixed the lights on our bike handles and continued on. It was pitch dark when we arrived at a fork: the left went to Toukhel and the right to Chitlang.

We saw a light, which appeared like a tea shop. “Hello, how far is the goat-cheese homestay at Chitlang from here, bhai (bro)?” I stopped to ask a young fellow. He looked at our bicycles and said, “at least two hours.” It was already seven and we were making very slow progress as the darkness was black as coal. The visibility was reduced to barely 10 feet, the bumpy road frequented by muddy pools and shallow trenches. Saddle soreness is a horrible thing to happen to a biker but it does, no matter whom it is a pro or a beginner. A long time in the saddle causes the soreness and it sure hurts. Padded shorts specially made for mountain biking helps so does an application of Vaseline (petroleum jelly) to your perineum. We were pedaling in the saddle for almost 7 hours. We had our padded shorts on, applied a liberal quantity of Vaseline and often stood up on our bikes to give our butts a bit of a break and to restore blood flow. But it still hurt. Damn!

After something like one-and-a-half hours of pedaling in the pitch-black night across spooky dark shadows of wooded hills with no settlements or lights in sight, I was a little worried. I kept asking Shayeet if we took a wrong turn somewhere–there was no telling because it was just too dark and confusing. “No, I don’t think we ever came across a fork. We’re dead on the track,” he answered but sounded uncertain. Then, after doing a short downhill section, lights started appearing in the distance.

Our faces lit up, Chitlang, at last! It was already nine at night.

The streets were muddier along the deserted bazaar. We finally made it to the homestay at around 9.30pm after dodging potholes and deep ruts with heavy slush. Phew, we had done in excess of 120km that day! Since we had called the lodge earlier, we had no problem getting food and a room for the night. Deadbeat as we were, nothing could be more welcome than a hot meal and a cozy bed. We wasted no time and hit the sack after food.

End of Part I.