Fall armyworms have come to Nepal from America, and they can trouble maize farmers here A notorious caterpillar species has recently travelled to Nepal, all the way from America.

The fall armyworms (FAW) are voracious caterpillars (not ‘worms’) which travel around the globe, frightening farmers. This invasive agricultural pest is native to America, but has already travelled to Africa and Asia. Scientists fear Europe and Australia could be the next destination.

The armyworms are significant pests that attack cereals and forage grasses, and can feed upon 186 plant species from 42 families. Mostly, they feed on maize.

Reports show that the pest has caused crop losses of $13.3 billion in Africa alone where it was first detected there (in Nigeria) in January 2016. In India, it was first detected in July 2018 and already causing havoc there. Recently, Nepal Agricultural Research Council (NARC) has reported the first sighting of FAW, localled known as phaujikira, in Nepal. The first case was reported from Nawalparasi district of western Nepal on May 9, 2019. Because the pest’s favourite, maize, is the second most cultivated food crop in terms of area and production after rice in Nepal, the caterpillar may infest the entire farmland across the country.

They are scientifically called Spodoptera frugiperda, and belong to the moth family. An adult FAW female moth is a strong flyer and can travel up to 100 km in one night. She can lay 100-200 eggs on the surface of lower leaves and are covered in protective scales rubbed off from the moths’ abdomen. The colour of eggs changes from cream white to light brown or green before hatching.

Right after hatching, these tiny monsters begin feeding on the leaves. As they grow, they change from light green to brown.

It is relatively simple to identify fall armyworms. They have four dark spots forming a square on the second last body segment and a dark head with a pale, upside down Y-shape on the front. They are at their most damaging stage when they are 3-4 cm long, similar to the size of a matchstick. The pupa is shiny brown and usually found 2-8 cm deep into the soil. A larva needs about 30 days in optimum conditions to complete its life cycle.

The larvae create semi-transparent patches after feeding on the leaves, which looks like windows on the wall. They are so notorious that they can spin silken threads which catch the wind and help them fly to a new plant. Older larvae feed voraciously by making a line of identical shot holes in the leaves. Therefore, they have got the name from the way they advance in a mass like an armed military troop. 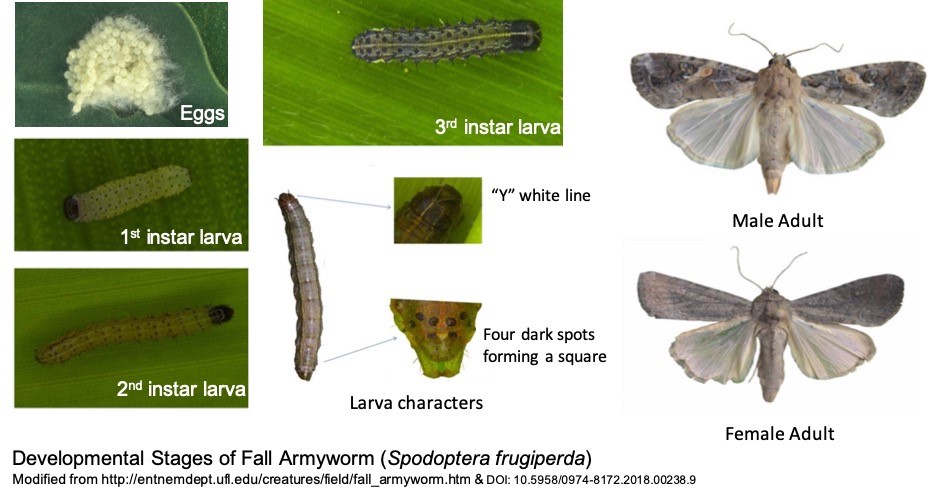 As they develop, they hide into the whorl. Due to this feature, it is difficult to detect early infestations. But, the damage on leaves can be easily observed later due to its tattered feeding, and moist sawdust-like poo on the leaf surfaces. The infestation causes inhibition of growth of the developing tassels and kernels, thus reducing quality and yield. The caterpillars dig themselves into the side of the cob, thus rotting the grains.

Direct control methods, practised in the US and Africa, target the larvae, but there are bottlenecks due to their biology. Larvae are only active during the night, so treatment such as spraying is most effective in the daylight. The older larvae tend to hide into the cob, so applying pesticides is not effective unless applied when they are young.

Recommended insecticides include chlorpyrifos, malathion, permethrin and so on. In the US, pesticides and genetically modified crops are the most widely used; but there are reports already suggesting the resistance to both. However, there are biological (non-chemical) pesticides that could also be used. These are pesticides derived from the microorganisms such as fungi and bacteria which cause diseases in insects.

Several breeding programmes have developed field crop varieties with improved resistance against FAW. Classical biological control method could be practiced by the introduction of the known specialist parasitoids like Telenomusremus.

National authorities should take actions immediately to avoid massive loss of yields in future. They need to advice farmers on actions they can take immediately. They can check for susceptible crops at least once a week. They should aim to detect eggs or young larvae. Windows on the leaves can visually detect early damage. For the small scale, applying sand/soil mixed with ash into the whorl could be one option immediately. One can promote awareness of this pest among local farmers, including their identification and damage. They can also select pesticides which are already registered or recommended for FAW control in the US. Authorised national laboratories could conduct experiments to test the efficacy of recommended pesticides.

The International Maize and Wheat Improvement Center (CIMMYT), Nepal is already evaluating the efficacy of push-pull cropping systems to control FAW, an approach under an integrated pest management (IPM) system. It involves two types of crops: napier grass and desmodium plants. Desmodium plants are planted between the rows of maize, where napier grass surrounds the maize crop. Desmodium releases the volatile chemicals that repel FAW moths (push), while the napier grass produces chemicals that attract female moths (pull).It is a biological agricultural pest control strategy providing extra benefits such as desmodium improves the fertility of the soil by fixing up the nitrogen, and it also provides mechanical support to prevent soil erosion.

Likewise, academics have to conduct basic research on FAW biology, ecology and population dynamics, which would give insights for the improved recommendations to minimise pesticide use. They need to explore the role of indigenous natural enemies, the patterns of FAW damage and expansion of ecological niche concerning seasons and agronomic practices.

For example, in China, researchers from Institute of Plant Protection of the Chinese Academy of Agricultural Sciences have carried a field trial to deploy predatory natural enemy (stink bugs, Armachinensis) of FAW. An adult bug can kill up to 41 fall armyworm larvae in a day by piercing and sucking out the body fluid, which is impressive. However, for now, the simple formula seems the most effective: Find it, kill it!

The writer is a doctoral student at the Institute for Insect Biotechnology, Justus Liebig University Giessen, Germany.