Nepal has always been known as a tea-drinking country. However, coffee has established itself as a thriving drink in Nepal of late. More and more people in Nepal are flocking to numerous coffee shops in cities such as Kathmandu, and Pokhara. Coffee has been an essential part of meetings, dating, and for many other reasons.

But, where do these beans come to Nepal, and how coffee culture started in Nepal? We will explain based on our research.

There is no clear information on when people began drinking coffee in Nepal. However, it has just been some 20 years since its popularity skyrocketed.

Till 2003,  there were probably less than 20 coffee shops in various towns in Nepal. But, as of now, there are also some noted coffee shops established as brands such as Himalayan Java Coffee (started in 1999), Arabica Coffee and others. Along with that, there are many independent cafes and coffee shops offering Nepali highland coffee beans showcasing the growing coffee culture in Nepal.

Coffee has not just remained a foreign drink preferred by tourists or a foreign drink. Many local people have become coffee lovers. Drinking coffee has become a fashionable trend in Nepal and also a need for some who drink it to feel good.

As of now, various espresso-based coffee drinks such as americano, cafe latte, cappuccino, mocha, and also filter coffee are consumed in Nepal.

Well, coffee was first introduced in Nepal by hermit Hira Giri in 1938. As per the National Tea and Coffee Development Board, Giri brought some seeds of coffee from Myanmar and planted them in Aapchaur, Gulmi for the first time.

On the other hand, Gurkha soldiers and Nepali workers working at South Indian coffee plantations are attributed by some coffee traders for bringing coffee seeds from India so that they can cultivate coffee in Nepal and locally consume them after coming back to Nepal.

As an alien crop in the soil of Nepal, coffee crop and the cherries it bears allured other farmers in that area towards it. Gradually, the trend of coffee plantations began in Nepal as the plant passed from one farmer to another.

Coffee was a ‘curiosity plant’ for over four decades until the late 1970s. It was in the late 1970s when the Government of Nepal imported coffee seeds from India and distributed them among farmers and also set up a coffee processing plant, which expanded coffee as a commercial crop.

According to the National Tea and Coffee Development Board, the major shift to commercial Coffee production took place in the mid-eighties mainly after Nepal Coffee Company was established in Manigram, Rupandehi in 1983/84. Its establishment made coffee producers able to sell coffee.

However, it was only after 2002 that domestic consumption of coffee increased. Meanwhile, there was a considerable increase in the export of Nepali coffee. This motivated coffee producers to take coffee as a good source of income or as an income-generating crop.

Considering the growing interest of people in coffee and the favourable environment and climatic conditions for coffee plantations, the Ministry of Agriculture launched a Coffee Development Programme in Nepal.

Due to that, coffee plantations have spread to approximately 40 districts including Lalitpur, Gulmi, Palpa, Sindhupalchok, Kavre, Syangja, and others.

As per Nepal Coffee Producers Association, approximately 70% of the total coffee produced in Nepal is domestically consumed. Regarding coffee production, around 517 tons of coffee are cultivated annually. 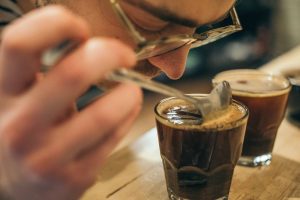