Sheikh Mohammed bin Abdullah Al Thani, a member of the Qatari royal family travelled to Nepal for the first time in 2008. Known as Moe Al Thani in the climbing world, the prince had earned recognition as the first Qatari to climb Mount Everest in 2013. Still, he had not been able to climb Ama Dablam near Everest.

“But, I wanted to climb it since 2009,” Al Thani said on Saturday after successfully making his dream come true last week, “If you ask me [why it is so], it will be a very long answer.”

“I saw it during my second visit to Nepal when I reached the Everest Base Camp. I always wanted to climb it since but never got any opportunity.”

In October this year, however, the royal got an email from his old friend in the United States, Garrett Madison, also a climber. The American friend informed him that he was preparing to climb Ama Dablam this autumn. Although Al Thani was not prepared for any expedition anytime soon due to the Covid-19 crisis across the world, he decided to sign up for the Ama Dablam expedition because it would make him achieve a long-awaited opportunity.

It was just two weeks before they arrived in Kathmandu. In the two weeks, they prepared everything ready including travel documents and logistics for the Nepal trip.

“But, once we reached the mountains, we forgot everything about Covid-19… Everything there was as it was in the past,” he remembered. Perhaps that spirit helped him climb the 6,812-metre peak.

Else, the sheikh said this mountain was “much harder than Everest.”

Nevertheless, for the prince, climbing a mountain always meant challenges in life. But still, it is an achievement worth pursuing because reaching the top metaphorically means overcoming all those challenges once faces in life.

Al Thani feels it was a great honour to him that his expedition became the first team to climb Ama Dablam this year as all mountaineering activities were closed in the spring.

As soon as the government reopened its door to climbers and trekkers, Al Thani and Madison had no qualms about climbing the peak. But why?

Moreover, he says Ama Dablam is the most beautiful mountain in the world. So why would he delay challenging himself on this peak?

Completing the expedition, he returned home on Sunday. On Saturday, Nepal’s Tourism and Civil Aviation Minister Yogesh Bhattarai saw him off, also congratulating on the achievement. 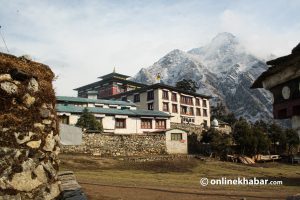