Former prime minister Baburam Bhattarai has suggested that former king Gyanendra Shah open a political party and join politics. He says it is now clear that the monarchy could not be reinstated in the country.

Speaking at a function organised on the occasions of major festivals like Dashain and Tihar by his Samajwadi Party Nepal in Gorkha district headquarters on Thursday, Bhattarai said Shah should come through a party if he had a desire to rule again.

He said it was wrong to think that the monarchy would be revived only because people went to the ex-king to receive Tika on the occasion of the Dashain festival. Bhattarai clarified, “You should not suspect that the monarchy will come back again. It is possible no way. It should not be possible.” 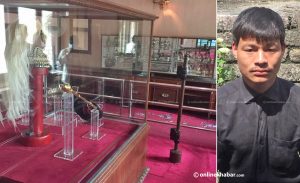