After nearly 11 months of cultural presentation, a ‘lifeline’ of Navadurga Gana of Bhaktapur came to an end last Thursday (July 1), on Asar (third Nepali month)’s Krishna Ashtami (the eighth day of the waning moon).

As per the rituals, this year’s Navadurga Naach (dance) too will conclude once the decorated face masks used by the Devgana (the group of those playing the role of the deities) are burned and turned into ashes at Brahmayani near the Hanumante river.

These artists participating in the Navadurga dance get relieved of their duties starting Bhalbhal Ashtami (Asar Krishna Ashtami) to Shrawan Krishna Chaturdashi (in August).

And, every year, on the day of Ghantakarna Chaturdashi or Shrawan Krishna Chaturdashi (usually in August), the deities of Navadurga Gana wear the ceremonial masks again. It is believed that after wearing masks, they become gods themselves and is believed to give them supernatural powers; it gives them a lifeline.

Just as there are 16 rituals to perform in a person’s life, Navadurga Ganas also perform all the rituals. In the 11 months, the Navadurga Gana perform their cultural dances in every tole (locality) of Bhaktapur. The rituals performed are separate and unique in each tole.

The end of a life

The end ritual of Navadurga Naach on the day of Bhalbhal Ashtami (last week) is a ritual bound by tradition. Experts say there is no reference to scriptures.

Cultural expert Sharma suggests a possible explanation saying that the river of Bhaktapur used to be flooded on the day of Bhalbhal Ashtami, with that the river used to wash away any garbage accumulated on the riverside. “It is believed that the faster the river flows, the purer the river becomes,” says Sharma adding that is why Hanumante river must have been chosen for the ritual. The word ‘Bhalbhal’ is a Sanskrit word. It is said Bhalbhal Ashthami refers to the loud noise water makes when flowing in the river.

Some in the Newa community call the day ‘Bhagashthi’. This is the distortion of Bhalbhalashthami, the amalgamation of the words ‘Bhalbhal’ and ‘Ashtami’.

The last Navadurga Naach is performed on the day of Jestha Shukla Shashthi or Sithi Nakha, in Ichhutole. On the day, it is customary to perform the mantra-karma (ritual) to first wear the mask and then return the masks, as per the rituals, on the same day. But, the jewels on them are not destroyed.

There is a belief among the devotees that the godly powers fade away from the masks as Navadurga Gana members return the mantra. As per the ritual, the mantra is returned at Ichchhutole, after their last dance. But, since returning the mantra is not possible, what they do is return karma instead. Just like when one gives a face and life to any idol to make it a god, they are destroyed when karma is returned. ”There is no ritual performed starting from Sithi Nakha to Bhalbhal Ashtami.”

Thus, it is customary to complete the lifecycle of Navadurga on the day of Bhagashthi that started from the day of Gathemangal.

On the day of Bhalbhal Ashtami, before the final rituals, all the members of Navadurga Gana go around the city once in the rhythm of Gana Baja (orchestra of local musical instruments). The rhythm played on this day is different from other days.

The members of the group live in Dya Chhen (the house of the gods). In the 11 months that they stay there, it is believed that all devotees should visit the Devi temple at least once.

There is a silver idol in Dya Chhen of the goddess Mahalakshmi. It is customary to keep a kalash (ceremonial pot) behind the idol. After immersing the pot at Hanuman Ghat, the Navadurga Gana’s karma is formally concluded. It is believed that a fish is also kept in a pot that has its own significance. Just as a fish disappears into the water, Sharma says the body gets absorbed in panchatatva (the five essential elements of the world).

At the same time, the masks used by the Devgans are burned, like the final rites of humans. Among the Devganas, the person wearing the Bhairav mask gives dagbatti (funeral pyre) to all the 12 masks and performs other final rites. But, their jewellery and clothes are not burned. After this, the Devganas are not allowed to enter Dya Chhen.

Preparation for the final

Preparations for the ritual start about 15 days before the day. Navadurga is a purely tantric goddess and she is worshipped completely in a tantric ritual On the Sunday or Thursday before the Ashtami, the Navadurga Gana is given ‘sijaa’ which means ‘meal before death’. After sijaa, in a courtyard of Gachhen Tole, the Devganas are given bi-hi (cold blood). This becomes their last official meal.

On this day, there is a unique custom where Goddess Mahalakshmi goes back to the temple in anger. There, they stop Goddess Mahakali from entering the temple. And, from the day of Bhalbhal Ashtami to Gathemangal, no member of the Navadurga Gana is allowed to enter the temple.

But, when the same Navadurga is brought to Taleju, it is worshipped according to the Vedic method, says culturologist Sharma.

Qualification for the godhood

In the past, those who regularly served in Dya Chhen and performed strict rituals at night used to participate in the Navadurga dance. But now, the Vanmala Committee selects the candidate from one of the aspirants that have applied. Sharma says it is difficult to find the same qualities as in the past.

Search for the gatekeeper of hell

Navadurga Gana is a representative character of the goddesses like Brahmayani, Maheshwari, Kumari, Barahi, Indrayani, Mahalakshmi, etc. On the day of Gathemangal, the Navadurga Gana go in search of people (khappar) with 32 characteristics. There is a belief among people that those selected by tantric methods will die in the next six months.

The secretary of Bhaktapur Tourism Development Committee, Deepesh Raj Sharma, says the Navadurga dance is performed with new characters every year. It is believed that a person who has taken out a worship vessel from Navdurga by the tantric method will die within six months.

Earlier, once the Devganas found a person with said 32 characteristics, the Navadurga Gana would go out and ask for that person’s clothes. But, it is believed that if they did not give clothes, the Gana members would go in search of another person. However, now, that custom has disappeared. 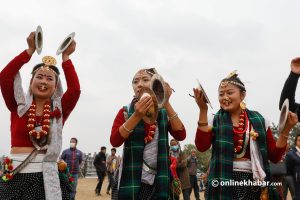