Local female potter colouring earthenware and lining them to dry.

On warm sunny winter days, Roshan Prajapati is seen busy moulding wet clay using an electric pottery wheel at the Pottery Square in Bhaktapur. For ages, the square has remained a centre of the pottery industry of the capital.

Like Roshan, many men of his neighbourhood are busy moulding clay into different shapes there whereas their female colleagues are seen mixing mud or clay with a machine, decorating, drying, and colouring the pottery in the courtyard and alleys.

With the availability of multiple alternatives for jobs and uncertainties in the income as the users also have several options, the number of people practising pottery as a profession is on the decline. Nonetheless, those in the business say a lack of market is their least concern, rather they are struggling hard to meet the high demands.

The family business makes a fortune

The Prajapati community has been involved in pottery for generations. Every Prajapati household, until a few decades ago, was involved in this craft. However, by now, the number of families following their traditional occupation has dropped to about 30, says Bishnu Prasad Prajapati, a potter.

Although the number of the household involved in pottery has declined over time, the demand for earthenware is significantly high in the present day. And, the industry as a whole is being revived.

Ganesh Kumar Prajapati, 71, while mixing clay, says, “Its market has grown over years. Now, it’s like we can sell as much as we can make.”

Ganesh’s son, Bishnu, 42, does not even remember when he learned the skills. He tries to give it a try though, “I was too young back then. Maybe, seven/eight years… I learned it from my father and my grandfathers. And, till today, this has been my main occupation.”

With the growing trend of matka biryani and matka chiya, the demand for earthenware has risen, says Bishnu.

However, this demand is only limited to a few types of utensils such as khutruke (clay piggy bank), glasses, flower pots, pots,  and diyo (clay lamps, during Tihar). Today, there is almost a negligible demand for utensils like ghaito (container), and gagri (water container), according to Lalit Prajapati, a 76-year-old potter.

Other local potters of the Pottery Square like Daya Ram Prajapati, Roshan Prajapati and Satya Laxmi Prajapati also share that the demand for clay art has skyrocketed nowadays.

The income they are making from the pottery ranges from Rs 25,000 to Rs 70,000 per month. A potter can sell as many pots as they can make, the potters say, and their earnings depend on the same.

Generally, people consider modern technology as an enemy of traditional art. However, for potters of Bhaktapur, the case has been otherwise.

Lalit Prajapati says, “Earlier, we used to make earthenware by rotating a wooden stick on the manual wheel. However, nowadays, this is replaced by electric pottery wheels. I used to make the items with the traditional wheel only as it used to attract a lot of tourists visiting Durbar Square. But, after the recent lockdown, I have started using electric wheels.”

Bishnu says thanks to the new technology like clay-mixing machines, electric pottery machines and chimneys for heating up the shaped wet clayware, it has now been much easier and much faster to manufacture pottery compared to the old days.

Further, Bishnu informs, “This has aided to multiply the production which has expanded the market of the products in the country.”

One load of clay of a mini-truck usually runs for a month for a potter, says 30-year-old Daya Ram Prajapati, “And, as per the order for the wholesaler, one to two load of a variety of pottery ware including khutruke, dhupauro, flower pots, and glasses on mini-truck is sold by each every month.”

But, it’s not easy all the way

Daya Ram, who has been making pottery since he was in his mid-teens, also says there are other problems although the market is not a concern for them.

Sometimes, it is very difficult to get the clay to manufacture pottery, he says, adding, “In the earlier years, we didn’t have to buy clay. We used to collect them from the fields. But, now, we have to buy it.”

Although the present market for pottery seems sound, there are very few youngsters interested and involved in learning these skills. This has put a question mark on the existence of the age-old occupation of the Prajapati community.

Lalit, who is already in his mid-seventies, says, “My son knows this skill since he was a tween, and he is involved in the same profession as well. However, my grandson has no interest in pottery.” 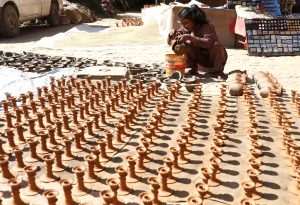