Another wedding season in Nepal: Why too few dates for too many couples every year? Mangsir–the eighth month of the Nepali calendar system has two major connotations. For farmers of the country, this is the harvest season. For marriageable young men and women, however, this is the time to find their life partners or to tie conjugal knots with their loved ones.

Generally, four months, before Mangsir, are not considered auspicious for the wedding in the traditional Hindu astrology whereas the next month is also not a favourite. This year’s case is even harder; if any couple misses the chance of Mangsir, they will have to wait until Baishakh (mid-April to mid-May 2021) to find an auspicious date. Therefore, it is likely that you might have several wedding receptions to attend this Mangsir.

But, why is that?

We have some helpful information for you.

Why do you need to wait for an auspicious date?

Astrologer Basudev Krishna Shastri says it is important for a wedding to happen on a holy date because it is one of the 16th samskaras (rites of passage) as per Hindu Vedic traditions.

“Marriage is related to the continuation of human species in this world,” he explains, “The Vedic tradition, hence, considers a wedding as the combination of two souls that should be united with the blessings of all the gods and goddess from all four directions, the sun, the moon and the stars.”

And because fire is also considered a god as well as an agent via which all other gods receive offerings given by humans, it is important that one weds beside a fire on an auspicious date, according to him.

Why only certain months?

The traditional calendar system divides a year into two halves, called Uttarayana and Dakshinayana. According to astrologer Laxmi Prasad Baral, most weddings take place in Uttarayana (Magh to Asaar or mid-January to mid-July). “During these months, the sun travels to north from south in the celestial sphere,” he says, “But, Chaitra (mid-March to mid-April) is an exception when weddings cannot be scheduled.”

“The Yamalok lies in the south where the god of death, Yama, lives. Basically, the south is known as the direction of pitris (ancestors) and the north is of gods and goddesses,” adds Baral, “Therefore, the weddings in the Dakshinayana (when the sun travels towards the south from the north) are not considered good.” But again, there is also an exception of Mangsir (mid-November to mid-December).

For him, the practice of performing weddings in the Mangsir month (one of the months of Dakshinayana) was lately developed considering that Lord Vishnu had also awoken from his ‘four-month sleep‘ by this time, describes Baral.

How do they calculate such dates?

Shastri says astrologers calculate ‘good’ dates for a wedding after studying the movement and positions of the sun, the moon and other planets in the solar system, mainly, Jupiter and Venus. Likewise, the five elements of time (Panchanga)–tithi, nakshatra, yog, bar, and karan–are also considered.

Among nine planets recognised in the traditional astrology, positions of Jupiter and Venus are important in fixing a wedding date. Jupiter is the guru of all gods whereas Venus has a role in reproduction, Shastri explains One can wed only when both Jupiter and Venus are on the rise (udaya).

Meanwhile, Surya Prasad Dhungel, the member-secretary of Nepal Panchanga Nirnayak Samiti, the government authority assigned to decide festival dates and auspicious times, adds, “There are only 11 (out of 27) nakshatras ideal for weddings. Hindu scriptures have also clearly mentioned the ideal tithis and months for weddings and other occasions. Also, weddings cannot be held during a malamaas or kshayamaas.”

What if you fail to heed?

Because there are a few selected dates for weddings in a period, finding a space for wedding receptions on and around those dates is a real hurdle for residents of crowded cities such as Kathmandu. Moreover, families find it difficult to attend multiple parties on a single day.

That is why, nowadays, there are many who do not wait for the auspicious dates to get married. Likewise, people have begun considering weddings on other festivals such as Akshaya Tritiya, Bibaha Panchami, Krishna Janmashtami, and Navaratri as auspicious too.

But, Baral highlights weddings cannot take place on Krishna Janmashtami or Navaratri as Lord Vishnu, the main god of yagyas who grant the worshippers the fruit of yagyas, is asleep this time.

Moreover, Shastri finds the trend of defying set dates and marrying on other dates completely wrong and comments, “If the wedding is to be performed as per Vedic tradition, the couples have to wait for an auspicious date. If not, there will negative consequences on their marital life. Also, there will be difficulty in reproduction; their child might be born with several disabilities.” 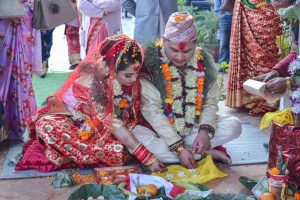