Three minors have sustained injuries after an acid was hurled on them during a Holi celebration in Shankharapur municipality on the eastern outskirts of Kathmandu on Sunday.

The injured including a 16-year-old girl, an 11-year-old and another nine-year-old boys are undergoing treatment at Sushma Koirala Memorial Hospital, informs SSP Ashok Singh, the chief of the Metropolitan Police Range in Kathmandu.

The acid was hurled at the girl’s face and hands of the boys.

Preliminarily, police have found that a group of teens had gone to a local milk collection centre in search of water for the celebration. Then, they had mistaken an acid kept there in a bottle for water, resulting in the injury.

Milk collection centres use acid to measure the amount of fat in milk. 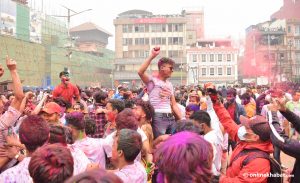