A demonstration outside the PM’s residence in Kathmandu demands survivor-friendly rape laws in Nepal, on Friday, May 20, 2022. Photo: Shankar Giri

Last week, a woman posted 20 videos on TikTok, in which she confessed how the organiser of a beauty pageant she took part in drugged, raped and blackmailed her in 2014 when she was only 16. The video went viral on social media and sparked outrage. Since then, people have been demanding action to be taken against the perpetrator and demanding justice for the survivor by staging protests across Kathmandu.

This has sparked another outrage in the country as protestors demand the statute of limitation be removed. In line with the activists, stakeholders also think it was high time Nepal removed the provision, and there are different options available for the same.

“How can they say that I am no longer an abuse survivor because the incident took place eight years ago? What kind of rule is this when they won’t take my report; the police say the court will refuse to take my file,” she said with tears in her eyes in a video posted on her TikTok.

This has even made its way to the House of Representatives. Nepali Congress leader Gagan Thapa spoke about how it was time to review the statute of limitation regarding rape as he called on the government to take strict action against the perpetrator.

“These survivors of rape and abuse live with fear all their life. For them, time stops after such an incident. This is why we should look to remove the statute which might help more survivors come out and speak,” she says.

“There are many countries where the statute of limitation doesn’t exist. But, in Nepal, the law was made thinking that after an incident the survivor will report it the very next day. This is wrong,” says Shashi Basnet, a lawyer and a rights activist. “But, it isn’t as simple because our society isn’t supportive. Due to this, they keep it within them for years.”

She believes that in Nepal, people protect the accused rather than the accuser and that mindset is what keeps the survivors from speaking up.

“Everyone is different and that is what our lawmakers should understand. This statute of limitation must be removed,” says Basnet.

Police say that due to the limitation, they cannot do much about the recent case. But, based on the survivor’s statements and video, police have arrested the accused Manoj Pandey who is the owner of Model Global Visa Consultancy and the organiser of Miss Global International.

Rights activists say that this particular case was more than rape. They claim that this was a crime against humanity and the statute of limitation should not be applicable here.

A lawmaker from Nepali Congress, Pushpa Bhusal, instead, says this case must be investigated further.

“A survivor coming out and speaking so openly about such a heinous incident is a big thing,” says Bhusal. “This case shows how loopholes in Nepal’s laws are protecting abusers. This needs to be changed.”

“We met Minister for Home Affairs, Bal Krishna Khand, and told him it was time the country reviewed the statute of limitation,” says Pandey. “We also told him that the rule was stopping many survivors from receiving justice and it was time the government was serious about changing archaic laws.”

“We want to discuss what we as lawmakers can do about this. We think the statute of limitation should be different when it comes to adults and minors,” says Pandey.

So, what are the options?

“Because this is in the law, it can be amended. Even if the lawmakers remove the one-year statute, it won’t be unconstitutional,” says Kharel.

Right activist and lawyer Mohna Ansari highlights that since the survivor of the recent case had tried to commit suicide and as Nepal’s laws discouraged that, the police could take action against the person who forced her.

“We need to find an alternative,” says Ansari.

There are cases in which the courts have also opened the doors for investigation. In Sunita Dhami’s case, a bench of Justice Balaram KC and Bharat Raj Upreti made it easy for the police to start the investigation.

Former justice KC says the National Criminal Procedure Code allows the court to interpret what the lawmakers were trying to say and move forward accordingly.

“That was what we did in the case of Sunita Dhami,” says KC.

The current case is also similar and the court could interpret it accordingly. But, the police have to bring it under law, says KC.

“Because the police have only heard about the incident now, it can book people involved and I’m sure if there is enough evidence, the court will support the police,” adds KC.

Senior advocate Kharel says the case can also be tied with human trafficking because the girl was drugged.

“The person can be booked according to Human Trafficking and Transportation (Control) Act, (2007) because the man has drugged the girl and taken advantage of her,” says Kharel.

SSP Basanta Bahadur Kunwar, commissioned to look into the case on behalf of Nepal Police, says that police are looking at what law they need to use to book Pandey and others involved.

“We are looking at different alternatives. We will reach a conclusion soon,” says Kunwar. 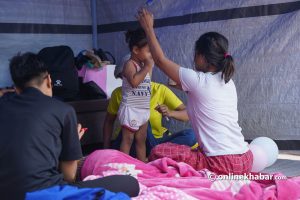 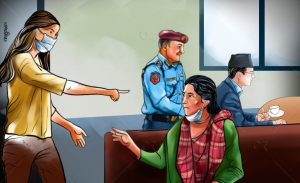