A new study has proved that Nepal’s road-building boom is detrimental to frogs; researchers hope this will raise awareness of amphibians’ plight across South Asia.

Every August, some communities in the Kathmandu valley in Nepal feed rice to frogs and worship them. Chandramani Aryal, a herpetologist, was quite excited when he learnt about this, as someone who studies reptiles and amphibians.

This joy has diminished over the past two monsoons. Aryal is increasingly aware that frogs are in trouble in the area. A study carried out by Companions for Amphibians and Reptiles of Nepal (CARON), a herpetological research NGO, as part of its annual activities, has found that Kathmandu’s rapid urbanisation has had dire consequences for these amphibians. Aryal is a co-author of the study.

As more roads are constructed around the capital of Nepal, the pressure on frogs will continue to increase, the study says.

Why were fewer frogs found in forest-rural areas? Aryal attributed this to a number of factors, such as the availability of water, and varying soil and air temperatures. “Further, it could be a consequence of some detection issues. We could not find the species when we visited, but that does not mean they were not there,” he explained. The researchers searched for frogs for 30 minutes in each transect, looking under logs, stones and boulders and using nets in ponds, lakes and streams. There may simply have been more places for frogs to hide in rural areas.

Roads were a significant factor in terms of the variety of species observed. The researchers recorded nine frog species in the rural areas, six in the suburban and five in the urban.

The report says, “Infrastructures [sic] such as roads result in modification and loss of wetlands that historically served as breeding habitats for amphibians’ populations. The impacts include a reduction in habitats for breeding or limiting the ability of adults to reach suitable breeding habitats.” Aryal added, “The noise of vehicles also disturbs frogs.”

Road building has ramped up in recent years. Since the 2015 constitution gave powers to local governments, the pace of road construction has increased.

Aryal said the impact of haphazard road construction on biodiversity needs to be studied and taken into consideration. “Small species are directly connected to humankind. That is why some communities of Nepal worship them,” he said. “Frogs help farmers by eating pests. They also clean the water by eating mosquito larvae.”

Karan Bahadur Shah is a herpetologist and former director of the Natural History Museum at Tribhuvan University in Nepal. He said that, while quite obvious, the findings of this study are important. “People already knew that roads could pose threats to frogs, but this study has proved this fact scientifically,” he said.

What are the authorities doing?

There is no specific programme to conserve frogs and other ‘non-charismatic’ species in Nepal, the Department of National Parks and Wildlife Conservation told The Third Pole. Haribhadra Acharya, the department’s information officer said, “We have adopted a holistic approach; we believe protecting mega species ensures the conservation of the overall ecosystem in a particular region including all other species.”

There is no official data on frog populations in Nepal. “Counting frogs is just like counting mosquitoes in a place. It is impossible,” Acharya said. “I don’t think we have a science that can help in this regard.” CARON has also not estimated the population, due to the lack of research.

Aryal lamented that “in Nepal, before constructing roads or other infrastructure, the government requires an environmental impact assessment. But such assessments only look at whether the construction affects megafauna such as tigers, elephants and rhinoceros… development projects ignore amphibians’ and reptiles’ contribution to the ecosystem.”

The Third Pole also spoke with Shiva Hari Sapkota, spokesperson for the Department of Roads. Sapkota said his department has not recognised the impact of construction on small species. Like Acharya, he claimed that efforts to save large animals could help non-charismatic species. “The number of vehicles is on the rise, and we are expanding all major highways. In this process, we are constructing crossings under the roads to help the wildlife move freely,” Sapkota said.

No such infrastructure yet exists in Nepal, but Sapkota said the government will soon construct a few crossings along the Narayangadh-Butwal road near Chitwan National Park. These will serve tigers, elephants, deer and monkeys, Sapkota said, adding that he hoped these tunnels will also help small species. “We are heading towards addressing such concerns,” he added.

Danger on all fronts

One of the 10 species of frogs recorded in the Kathmandu study, the tiger frog, or Indian bullfrog, is listed in the CITES Appendix II. This means it could be threatened with extinction unless the trade for its meat and skin is controlled.

Across South Asia, there are multiple threats to frogs. A research paper published in 2014 identified some of these. In India, they are sold for meat; in Bangladesh, climate change and the use of pesticides are taking a toll on populations; in Pakistan, large industrial complexes and residential areas are replacing their habitats.

In addition to these pressures, in Nepal, large numbers of frogs are dissected by biology students. According to CARON, 52,151-102,405 frogs were dissected in 2010/2011 in Nepal; Aryal said he believes this number has increased. Many institutions across the world have put an end to this practice, as “they can just simulate the process,” said Aryal.

Finally, some species of frogs, locally known as ‘paha’, are widely hunted in the mountains of Nepal for food and medicinal purposes.

The researchers stressed that the study has wider implications for amphibian conservation.

Firstly, the rapid urbanisation in the Kathmandu valley is happening across South Asia. The report says, “The region, which has limited economic and technical ability to cope with the negative impact of urbanisation, is experiencing rapid urbanisation with more than 32.6% urban population, projected to reach 50% by 2050.”

Secondly, Nepal’s scant efforts to conserve frogs are echoed further afield. A 2014 report observed that conservation in India focuses on large animals, despite the country being home to over 300 amphibian species. In Bangladesh, the same report said, “Amphibian conservation is ignored and little work has been conducted on revealing the local threats to amphibians.”

Aryal said awareness needs to be raised about the importance of these species. To this end, CARON recently expanded Croaking Monsoon, which encourages local people to study frogs and launch conservation efforts.

He also highlighted the need for further research. “We need to calculate the exact impacts of construction work on frogs’ regular behaviours, breeding and other aspects. Our study could be a first step towards finding appropriate strategies to save frogs from the potential damages of development.”

This story first appeared on The Third Pole. 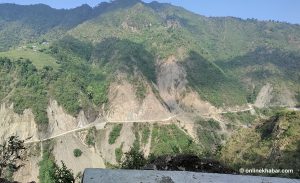