Think ‘roast’ won’t come to Nepal? It’s here already, thanks to you know who

“Look at Courtney Love…” (points at Courtney Love); “she looks worse than Kurt Cobain!” Audience gasps as Courtney Love gets up from her couch and staggers to hold a stance. It seems like she is legitimately trying to uphold her deceased husband’s honour. Can’t tell though, she looks like she is another world anyway. The evening was a ‘roast’, it was on Comedy Central, one of America’s most popular comedy networks.

This ‘art’ of roasting was one of 2010’s big mainstream gift to all humanity. It’s simple yet effective. You bring in a celebrity, and a handful of ‘insult comedians’; let them make rounds of jokes, unloading on a sapless fool ending with the man (or woman) of the hour-all this while glorifying how they can take a joke.

It’s one of those podiums where you wonder if its fascination or just decadence. It is a form of comedy that is the big middle finger to the oversensitive keyboard warriors who are white-knighting at the drop of a hashtag.

See to them, they are the other extreme; they are the ‘pseudo-Charlie Hebdos’ who stand up (excuse the pun) to such ludicrous emotions, and are awfully rifled as to how touchy their ticket buyers are becoming. It was a shot in the arm to the populace; the more the crowd squirmed, the more pleasure these funny men, and women (see how gender specific I’m not being, thank you PG era!) got out of it. So when AIB (All India B..something) decided to roast two people who popped at the idea of being roasted, you know it was going to be fun.

The whole aftermath after that show catapulted AIB to new heights. Even their own stardom became just right for they themselves to be roasted! Dashes of fame, unabashed demeanour and mild desperation to stay relevant. You couldn’t write a better script; except that they did cause a furor in the Hindi film industry and among general, ungracefully aging people who didn’t take kindly to this western fad.

AIB knew those people wouldn’t get it, and that was the beauty of it.

In a hyperbolic society, roasting makes the perfect sense. It tells you to not take yourself too seriously, be a little self-deprecating and not get wound up about every little thing. 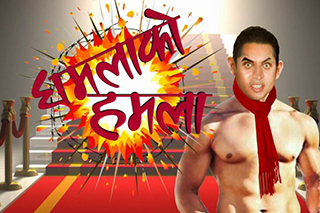 Look at ‘Dhamala ko Hamala’ right now and tell me it’s not a roast, if not worse. His remarks and slimy rhetoric are one of the biggest hits on YouTube from Nepal.

Dig up any roast you find and the central theme on the layers and layers of insults that would result in a fist fight anywhere else, is how thick skinned and benevolent the ‘roastees’ are. And people love nothing more than someone funny taking a dig at someone famous. It gives us a certain amount of malice satisfaction that reminds us, that they are just normal people too.

What comes ever so slightly close to this for us here, is Gai Jatra. Now clearly, Gai Jatra is nothing like roasting that happens out there, rather the vein of sarcasm and insults and imitations are on a plane that is courteous. One would wonder how would a comic relief practice as such fare in Nepal?

Look at ‘Dhamala ko Hamala’ right now and tell me it’s not a roast, if not worse. His remarks and slimy rhetoric are one of the biggest hits on YouTube from Nepal. They are downright offensive towards women and yet nobody bats an eyelid, people white knight on social media for women’s rights but he gets another female guest and does the same thing again.

We love it that we hate it, and fawn over his ‘silly’ little jibes. The local ‘khukura roast’ has already begun. We just call it an all out ‘hamala’ in Nepal.

And if you really think about it, Nepal is ready for a platform as such where people come and others make a mockery of them and then parade how brave they are to let comedians take a stab at them.

And if you really think about it, Nepal is ready for a platform as such where people come and others make a mockery of them and then parade how brave they are to let comedians take a stab at them. The first one would be Rishi Dhamala no doubt; I bet people would give their right hands just to roast him; the queues would be bigger than those for the petrol. That’s a man who is tailor made to be roasted.

We could throw a slew of names that are just ripe to be picked and poked but will they all get the joke?

Whether it really makes it here is the question, but in all honesty, it already has. The internet age has made people so distant so close that they are growing up with the same sensibilities, are ardent followers of whatever is trending, find normal conversation uncouth and are being raised by an army of trolls & memes.

You could roast the world and still not be satisfied because we enjoy it so much. We like it that it’s wrong and need it as a leveler to the nauseous amounts of keyboard warriors running rampant. Malice is an addiction, just like the one Courtney Love still has.