Before the 2015 earthquake, the Dharahara, also known as Bhimsen Stambha, was a celebrated heritage site of Kathmandu. For the people visiting Kathmandu for the first time, it used to be one of the greatest wonders of the city. For school kids, the picture of Dharahara itself was an icon of Kathmandu. But it crashed down, resulting in loss of property, lives and history during the mega quake.

Kathmanduites refer to the place where the Dharahara was located as Sundhara. A golden waterspout located close to the Dharahara has given the place its name, but Sundhara itself has lost a lot over these years.

Sundhara also used to be a significant monument of the ancient until the mid-2000s. Unlike Dharahara, it stood the test of time and has been the same, physically, since the beginning, but it lost its fame years ago before the collapse of the Dharahara.

Sundhara was resourceful and had provided locals with water and recreational space. But, it has been ignored and deserted now, filled with algae and dirty water on the premises. No one seems to care about it.

The tragedy of the golden spout

The ‘lu hiti’ (the local Newa name of Sundhara) was built together with the Dharahara by Bhimsen Thapa for Queen Tripura Sundari in 1825. There are also five stone spouts in the premises decorated fully with the architecture of stone and stone slabs. At top of each spout is a shrine dedicated to different goddesses.

These spouts once used to be gushing natural water that derived from the Rajkulo (pipeline laid by the kings) via the Budhanilakantha water system. The spouts have been established metres below the ground level so that it could easily get the groundwater.

But, for the recent two decades, the spouts have dried down.

Heritage activist Yadav Lal Kayastha says the inlet of this lu hiti was blocked when the Kathmandu Mall was constructed in 2004. “In the name of development, the mall was built. But, once the original source was cut off, the spout ran dry and the locals were cut off from water resources too. But, it is itself in shadows now, after jeopardising the natural resources of our historic site.”

Attempts were made to connect the spouts to artificial water resources, but those have been discontinued. Consequently, the golden spout is now covered with a green netted fabric within the makeshift barricade.

After a few months, standing tall in the heart of Kathmandu will be a new concrete building next to the remains of the collapsed Dharahara. Many people falsely call this new building the ‘reconstructed Dharahara’ whereas heritage activists are opposing its construction saying it lacks any historical significance.

Once the new building will begin functioning as a view tower, perhaps the saddest thing its visitors will view will be the golden waterspout. The historically significant Sundhara will suffer the plight of stakeholders’ ignorance, remaining under the shadow of the insignificant view tower.

The under-construction building has resulted in any amount of water collected in Sundhara to stay inside the premises and collect algae.

The ambitious plan of ‘Historic Dharahara Reconstruction’ project, despite the backlash, still aims to finish the construction of a “new Dharahara” and commercialise the premises, which also includes Sundhara and the previous land of the then General Post Office.

Heritage activists Alok Sidhhi Tuladhar and Alina Tamrakar think the government could have used the earthquake-hit Dharahara, instead of the ‘unnecessary’ new tower, as a memorial park. They also add a better way could have been to declare it an open space giving people a room to breathe in this already-congested valley.

But, apparently, no one at the policy level has prioritised using this historic and culturally important site of Sundhara as an attraction instead of the new Dharahara.

Kayastha thinks the authorities should have revived this heritage site instead of constructing a view tower. “Being the main attraction is a far cry, the authorities have left this historic site unattended. The water has now filled to the brim, burying the hiti within it,” says Kayastha.

Hopes of developing a Sundhara Park seems impossible right now, but he is optimistic that the authorities at least will clean and maintain the lu hiti premises and flow water even through artificial means. 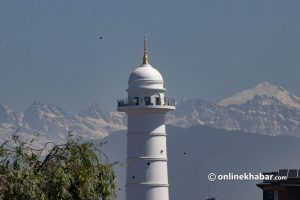