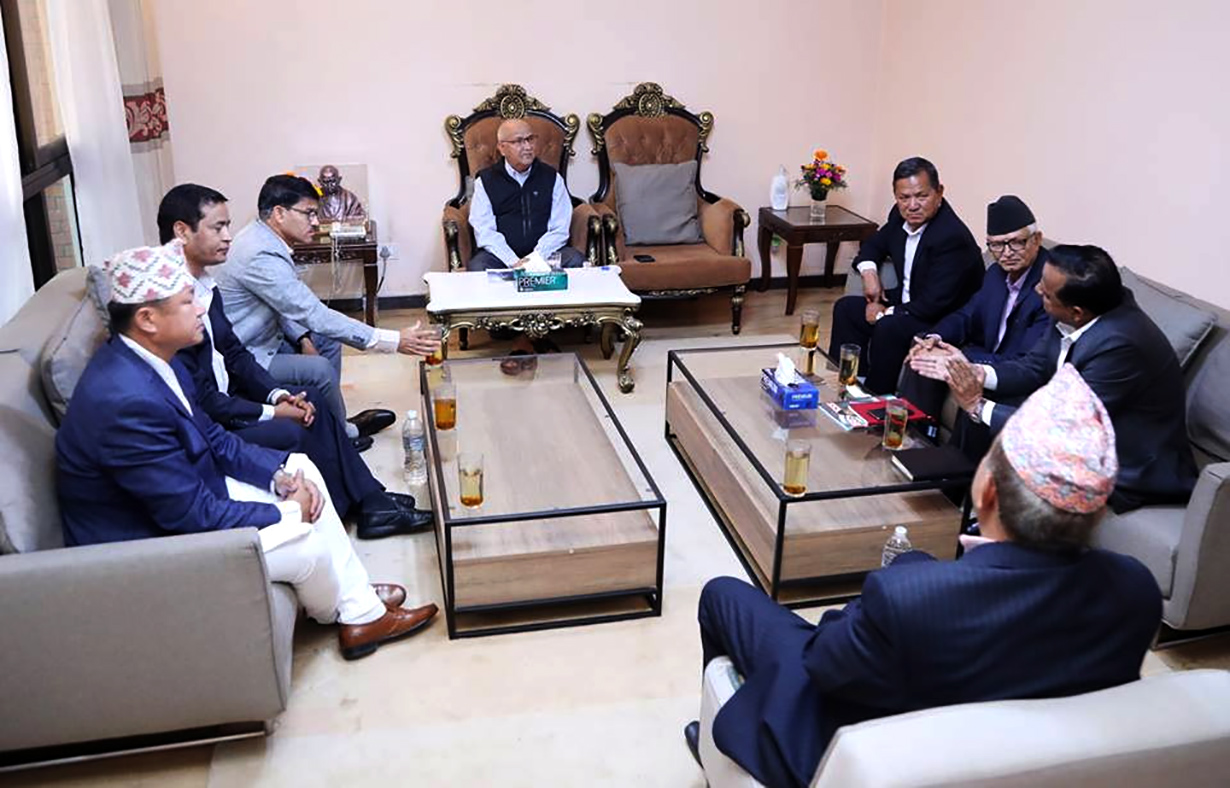 File: Prime Minister KP Sharma Oli in a meeting with chief ministers of all provinces.

On Saturday, Prime Minister KP Sharma Oli in an all-party meeting criticised the far-western provincial government for not cooperating with the federal government in controlling the Covid-19 outbreak.

“The provincial government sends back the people from the central government sent for situational assessment, monitoring or consultation, stating it does not need anything. Is this kind of attitude appropriate during a humanitarian crisis?” the PM asked.

At present, most of the health facilities do not have empty beds; isolation wards are full; there is a lack of oxygen and oxygen cylinders everywhere. There are also reports of a shortage of human resources, inadequate health supplies in hospitals and laboratories, affecting testing and treatment. Similarly, the Covid-19 contact tracing mechanism is also not effective. All three tiers of government, individually, are not capable of solving such problems at once.

Even though the Covid-19 second wave has paralysed the nation, the PM is yet to hold joint discussions with all the chief ministers regarding the pandemic control. Due to the lack of initiative of the federal government, there is no environment of coordination or cooperation among the provincial government; neither is it listening to the local bodies.

A former director of the Epidemiology and Disease Control Division (EDCD), Dr Baburam Marasini, says all government bodies are in their own ignorant worlds.

“By now, there should have been clearly defined roles and responsibilities regarding how the level of government would deal with the crisis, and how to coordinate with their counterparts,” he says, also hinting at the lack of legal instruments for the same. “But, the current act does not clarify anything. Just based on a notice in the Nepal gazette, it does not seem the provincial and local governments will get responsible now.”

Article 232 of the constitution says that the relationship between federal, provincial and local government bodies should be based on the principles of cooperation, coexistence and coordination. Article 235 says the federal parliament will make necessary laws to maintain coordination between all three.

However, so far, the government has not paid attention to making such laws.

As a result, the coordination between government bodies during natural calamities and other kinds of crises lacks.

Infectious disease specialist Dr Anup Subedi also says that victory against the pandemic will be possible only if all three tiers of government are united to set up quarantine, run Covid-19 testing, tracing, isolation and treatment programmes.

“Not just by imposing prohibitory orders, but all government bodies must play their part to subside the epidemic, by quarantining, testing, contact tracing, isolating the infected and treating the sick,” he says.

All the local government bodies have expressed dissatisfaction saying that the federal government has been uncooperative with them, even during the pandemic.

An official of the Bagmati Provincial Ministry of Social Development says there is a tendency among the local representatives to do everything on their own whereas officials of provincial and federal governments also want to take relief programmes directly to claim the credit.

“The federal and provincial governments are trying to have their separate influence at the local level, which is not appropriate during an epidemic,” the official says, “Likewise, the local officials are also getting more into unhealthy competition and promoting themselves than helping each other.”

“The chief ministers and the ministers are running on their own. There is no strong coordination or partnership among them as they fear others getting the credit,” the official says. “The role of the provincial government is being questioned because rather than setting up the system, they are making efforts to procure and distribute health supplies and budget on their own.”

With the intergovernmental coordination getting weak, dissatisfaction is rising at the local level. The local unit, which seemed to have done well last year and got praised for the epidemic control as the ‘Birgunj model’, also seems discouraged this time.

Birgunj Mayor Vijay Kumar Sarawagi says his government faced difficulty to control the second wave, not because of the open border but lack of enough preparations. “We are working thrice as much this time, but since the virus spread has been high, we have had trouble controlling the impact.”

Mayor Sarawgi accused the federal and provincial government of not working together with the local level. He says because the local government is working independently, without enough discussion of the real-time situation with other levels of the government, they face more difficulty controlling the outbreak.

“The provincial government provided two ventilators. If there was better coordination, we could have bought dozens of cheap CPAP and BIPAP machines instead of ventilators worth millions. This time, such machines have proven to be effective in Birgunj.”

“Last year, the metropolitan city decided to provide land to build a temporary 100-bed hospital for Covid-19 patients. We also set aside the budget,” he says, “But, the provincial government did not show interest and the plan has been in limbo.”

At present, there is a 100-bed isolation centre and a 100-bed Covid-19 hospital in Birgunj. The metropolitan city has made arrangements to deliver free oxygen to the infected people at their doorsteps. It has distributed medicine to 1,200 people and fed the needy in different places. “There are more people at hospitals than in other isolation centres this time. We should have been able to plan and work accordingly, but the local level was not capable on its own. All government levels should have worked together.”

In their own worlds

The story of the Jugal rural municipality of Sindhupalchok is not different from that of Birgunj. There is an isolation centre of 50 general and 20 oxygen beds with health workers including two medical doctors.

The rural municipality has requested the federal Ministry of Health and the Bagmati Provincial Ministry of Social Development, for the expenses incurred in running the isolation centre. So far, however, both the governments have not responded.

Hom Narayan Shrestha, the chairman of Jugal rural municipality, says although the local body has done effective work, the federal and provincial governments have not fulfilled their duties or provided adequate support, facilitation and coordination in the pandemic control. He adds the lack of coordination and cooperation among the local bodies have also added to the problem.

“Isolation in Jugal is sharing space with the infected from Balephi rural municipality also. The centre is well-equipped, but other local bodies have not been able to maximise all the resources,” informs Shrestha. He adds coordination among the government bodies would be crucial to set up ICUs at the district hospital for the treatment of critically ill patients.

But sadly, everyone has gone their separate ways, says Shrestha.

The same story in the valley

This kind of lack of coordination is seen not only outside but also within the Kathmandu valley. Although the rate of infection has increased, preparations for treatment including quarantine, testing, contact tracing and community isolation are still weak.

Local representatives are requesting to provide oxygen, beds, ICUs and ventilators at the hospitals as per need but have not been able to take the initiative to do contact tracing at the local level and provide community isolation with oxygen supply.

Meanwhile, the Epidemiology and Disease Control Division and the Department of Health Services under the federal government are claiming that the local levels are doing everything, including contact tracing.

Kathmandu Metropolitan City’s Chief Administrative Officer Rajeshwar Gyawali says that there has been a lapse in swab collection as there is a limit fixed by the federal government. This has affected the number of tests and contact tracing as well.

Problems at the local level

The Municipal Association of Nepal (MuAN), an umbrella organisation of municipalities, also feels that there is a lack of coordination and facilitation at the inter-government level.

The MuAN President Ashok Kumar Byanju says he wrote a letter to the Federal Ministry of Health on May 12 demanding the government immediately declare a health crisis in the country, put health services as a top priority and mobilise additional budget as needed.

He also says the local governments in all 77 district headquarters should establish and operate a communicable disease control hospital as soon as possible.

The letter also calls for vaccinating all citizens and establishing a financial partnership among all three levels of government for sustainability and effective implementation.

It has also demanded that the local units mobilise the unused funds of the federal ministry for the Covid-19 insurance of all citizens as well as mobilise the health workers and boost their morale.