Former DIG Nawaraj Silwal, who earned fame and controversy by challenging the government decision to appoint his batch-mate Jaya Bahadur Chand and then Prakash Aryal to the post of Inspector General of Nepal Police, has finally joined politics.

Silwal had resigned from the police organisation on September 12 after the Supreme Court upheld the government decision to appoint Aryal to the position. His resignation, however, is yet to be accepted.

Speaking at the function, Silwal said he entered politics after politics put him into injustice. “I was a soldier victimised by politics. After politics interfered with my job, I resigned and decided to interfere with politics. I could not find any place except the UML for it.”

“Till yesterday, I was a committed soldier of the state. Fro today, I have become a UML soldier. This has added more enthusiasm in me to serve the country.”

Silwal is likely to contest either provincial or federal polls from a constituency of Lalitpur. 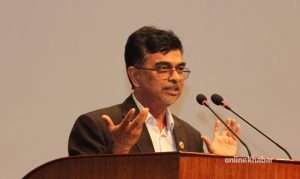