Seven provinces as per the federal system in Nepal on the new political map of the country issued by the government of Nepal, on Monday, May 18, 2020, and launched on Wednesday, May 20, 2020

A national survey has concluded that the majority of Nepalis believe the country is moving towards a positive direction.

The Survey of the Nepali People in 2020, conducted among 7,060 Nepalis randomly selected from 588 wards across seven provinces of Nepal by the Kathmandu University School of Arts (KUSOA) in collaboration with Interdisciplinary Analysts (IDA) and The Asia Foundation (TAF), says 65.6 per cent of the respondents are optimistic about the country’s direction.

However, interestingly, the report claims Nepali believe more in media and community-based organisations than they believe in political parties and their local representatives such as ward chairs and members.

“84.6% of respondents trust ward chairpersons/members while 91.8% still trust media organisations, followed by 90.7% who perceive community-based organisations as the most trustworthy institutions in the country. In contrast, political parties are seen as the least trustworthy institutions by Nepalis, as 43.8% of respondents say that they do not trust political parties.”

According to the report, 68.4 per cent of Nepalis are still unaware of the changes brought about by the 2015 constitution.

This report presents the views of respondents around the five broad topics, namely: public outlook and national mood, security and dispute resolution,identity and social relations, governance and political participation, and economic outlook and access to information. 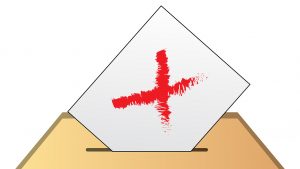