On August 18, the House of Representatives, the lower house of Nepal parliament, was on the verge of passing the Citizenship Bill as it is despite President Bidya Devi Bhandari asking the house to reconsider some points on it. Lawmakers from the CPN-UML, stating there were some weaknesses in the bill, protested against the passing of the bill. Joining the protest were two lawmakers from the ruling coalition – Parbata DC Chaudhary of the Nepali Congress and Nira Devi Jairu of the CPN-Unified Socialist.

Chaudhary asked other lawmakers to think out of the party and speak for the betterment of the country.

“Neither we nor our party is bigger than the country. I know, a lot of us think this is wrong but won’t say a word as they fear the party will take action against them, but we have to speak and speak now,” she said in the house.

Jairu also added to this and questioned the decision of senior leaders to pass the bill despite it having issues.

“Do we know what implications this bill will have on our future? Do the senior leaders understand this?” she questioned.

This is just one example of Nepal parliamentarians being populist. They, time and again, speak in the parliament to please the general public as snippets of them speaking about an issue can go viral on social media and mass media. They are often heard speaking against their own party, but when it is time to vote, these lawmakers always go in the direction that their party is going, leaving people to think that populism rules supreme in the Nepal parliament. It, ultimately, makes the democratic institution of parliament incredible, fear stakeholders.

The pressure of the public

Thanks to the country’s open political practice, these types of statements in the Nepal parliament do not go unnoticed. The public is watching and hearing everything that these politicians say. Maybe that is why most political leaders try and say things to be popular with the public. Rather than speaking about policy changes and how they will affect the country, most think about how their statements will be seen by the public and speak accordingly.

On May 1, 2020, as Covid was spreading in Nepal, the Legislation Committee of the National Assembly told the government to increase testing.

A few months later, on August 21, 2020, the Law, Justice and Human Rights Committee of the House of Representatives told the government to manage 10,000 ICUs and ventilators immediately along with undertaking PCR tests in all 77 districts.

These decisions at a time when the infection was in full flow were popular. The media too gave these a lot of importance. But, people who knew about the state of Nepal’s health system knew these were just talks and that implementing what the parliamentary committees said was impossible.

The negative impact of lust for being popular among Nepal parliamentarians can be seen during the drafting of laws and regulations. Take chapter 9 of the House of Representatives Regulations. The regulation states that members of the house can question the prime minister twice a month. But, this has rarely been implemented as Prime Minister Sher Bahadur Deuba has not held a question-and-answer session at the House of Representatives even once during this current term that began in July 2021.

Political science professor Lok Raj Baral says it is wrong for parliamentarians to focus on getting popular rather than focusing on long-term goals to better the country.

“All these people do is speak. When it comes to work, they do nothing and that sets bad examples,” says Baral.

And he is right. Many members of the Nepal parliament feel they can speak anything they want to become popular. Some say stories; some say poems some even quote songs, but rarely does anyone offer solutions.

Even Nepali Congress general secretary Gagan Thapa is guilty of popularism as he challenged the people of Nepal to kick him out of Kathmandu if the American Army came to Nepal after the Nepal parliament approved the Millenium Challenge Corporation grant. This was unnecessary, say political scientists.

To speak or not to speak

Lawmaker Bidya Bhattarai feels that a lawmaker should only speak what is relevant. She feels that at the moment, many lawmakers speak what they feel like and even when they talk about something relevant, they do not come up with solutions on how they can change things.

“If we continue to do this, people will stop believing us. We need to start implementing what we say and improve the society we live in,” says Bhattarai.

She says lawmakers do point out corruption and other issues but never find the cause and offer a solution. “I think we forget this is our job,” says Bhattarai.

Baral says populism is affecting both houses of the Nepal parliament as most lawmakers feel that to win elections, they have to be popular. And since they cannot fulfil the promises they give voters, all they can do is speak to get views on social media.

He feels that this is happening worldwide as parliaments across the globe are full of nationalist and populist ideas.

“People don’t believe in a strong party anymore; they believe in strong and popular people. This mindset and entered Nepal too,” says Baral. “But, a populist leader is mostly an expert in spreading illusion and we’ve seen that in the Nepal parliament too.”

CPN-UML leader Yogesh Bhattarai also says that it will take a few years for Nepal parliamentarians to get away from this populist trend. “People don’t believe in political parties. They are upset with us and for that reason, populism will reign supreme for a few more years in Nepal,” he says.

A populist trend that is seen everywhere including in Nepal is they point out the negative side of their opponents rather than talking about what they are going to do.

“They say they are the best and the others act for foreign nations and are corrupt. They try to agitate the general public that’s it,” says Baral.

This trend, according to Bidya Bhattrai, started in the Nepal parliament during the drafting of the constitution.

“Lawmakers started meeting various interest groups during that time and started bringing out issues based on their needs. Those who spoke in favour of these interest groups were made celebrities in society by these groups and this excited a lot of lawmakers,” she says.

She believes and hopes that this will gradually end in the coming future but says there is need for a new political practice among Nepal parliamentarians.

“We haven’t had a proper political culture in the country but discussions have started on how politics plays a role in the formation of a society and is key to change.”

She feels that lawmakers should keep in mind a few things if the country is to develop a new political culture. Nepal parliamentarians should remember the constitution before speaking along with acting keeping the law in mind and develop good practices.

“These are the democratic practices that all lawmakers should follow,” she says. 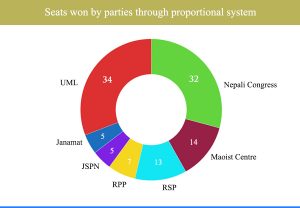