Liu Jianchao, the head of the International Liaison Department of the Chinese Communist Party, arrives in Kathmandu for a visit, on Sunday, July 10, 2022. Photo: RSS

Liu Jianchao, the head of the International Liaison Department of the Chinese Communist Party, has arrived in Kathmandu for a visit.

Liu landed at the Tribhuvan International Airport in Kathmandu this morning for a four-day visit, leading an eight-member delegation.

Officials of the Ministry of Foreign Affairs welcomed him.

This is Liu’s first foreign visit since he took over the role in the first week of June.

This is another high-level visit from the neighbouring country after the visit of the Chinese State Councilor and Foreign Minister Wang Yi in March.

Before coming to Nepal, Liu Jianchao had held a virtual meeting with the top leadership of the ruling Nepali Congress and the Maoist Centre and the main opposition party CPN-UML. 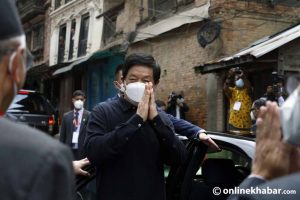