When Qatar’s Minister of State and candidate for the UNESCO Director-General Hamad Al Kawari visited the Buddhist shrine of Swayambhu in February 2017, he was surprised.

“Well, this inscription bears the name of Allah,” the Saudi dignitary had said looking at coins recovered from one of the chaityas (a Sanskrit term for a mound or pedestal or ‘funeral pile’) damaged beyond repair at Swayambhunath, one of the most important Buddhist shrines affected by the 2015 quake.

The Swayambhunath Stupa complex, which overlooks the ancient lake, now called the Kathmandu Valley, was one of the Buddhist-Hindu holy sites in the city that sustained massive damage. Although the main shrine, the ‘Mahachaitya’, withstood the shake that day, other shrines on the Swayambhu complex could not. According to the Swayambhu Mahasamiti, the federation of NGOs working to preserve the UNESCO World Heritage site, six monumental structures on the complex were damaged beyond repair and more than 21 other structures sustained damages.

“The structure from where the coins were recovered exploded as if a bomb had been dropped on it,” recounts archaeologist Devendra Bhattarai, who has been working on the Swayambhu reconstruction project. “It’s called the Mangal Bahudwar Chaitya or Tashi Gormang in Tibetan.” The chaitya is located between the Ajima, one of the goddesses deeply venerated by the Newars, the ancient settlers of the Kathmandu Valley and that of Bhairav, the Hindu god of war. It is believed that Bhariav and Ajima keep a close watch on the chaitya.

It all began on the evening of earthquake. “I reached the main stupa complex in the evening,” shares Devendra Bhattarai, one of the archaeologists working on World Heritage sites in Nepal. “There was dust everywhere and we could not see what was going on,” he adds. Locals present at the complex during the quake say the stupa ‘exploded’ and within a matter of seconds, the structure turned into rubble.

“We later came to a conclusion that the structure was built by just lining up the bricks and there wasn’t any mason work involved. The structure was given a lime coat and that was it,” shares Bhattarai.

Within a matter of days, a campaign was launched to clean the main stupa complex and meticulous records were kept of every item recovered from the chaitya, thanks to a collaboration between UNESCO and Nepal’s Department of Archaeology. “UNESCO decided to provide financial assistance to carry out an archaeological study of the structure and to reconstruct it,” shares Bhattarai.

“As students of Archaeology, we were also excited as this would be the first-ever chaitya to be scientifically excavated in the Kathmandu Valley,” he added. According to Department of Archaeology, although many chaityas in the Terai had been excavated, a thorough excavation of a chaitya in the Valley had never been carried out. “We never had the need to excavate a chaitya in Kathmandu. But because of the earthquake, we got this opportunity,” adds Bhattarai. That a coin with Muslim inscriptions was found in the rubble also added to the excitement.

The coin that the Qatari dignitary found so fascinating was not the only foreign currency that was found inside the chaitya. “We recovered coins from different periods of time and from different parts of Asia,” shares David Andolfatto, an archaeologist working for UNESCO.

According to Andolfatto, the other objects recovered from the chaitya were coins issued by the Mughal sultanates in India, the Malla and Shah kings of Nepal and even metal currency from China. In addition to this numerous (around 120,000) small tsa tsa, a form of traditional Tibetan Buddhist art made using a metal mould containing the hollowed, reversed image of a deity, stupa or other sacred symbols. Similarly, a golden leaf was also found.

It was only a matter of time before the excitement of the excavation also caught on with the monkeys of the temple. The tsa tsas had been infested by bugs. The monkeys got a taste of the bugs and that attracted them to the chaitya that was being excavated. “The primates of the shrine would have already started digging when we would get there early in the morning,” remembers Bhattarai.

But soon they figured out a way to shoo the monkeys. They put some fencing around the site and sped up their work so that the items exhumed could be stored safely under the supervision of police officials. When whatever superstructure of the chaitya was removed, archaeologists found that the structure had the shape of a mandala, one of the most important symbols in traditional architecture.

DoA staffers recorded everything that was recovered from the site.

So how did the coins get there? The answer was found inside a casket buried deep inside the chaitya. It bore the name of the person in whose memory the structure was built and also the date.

From what was recovered by the archaeologists, the chaitya was built in 1875, way around a hundred years after Prithvi Narayan Shah conquered the valley. The man, a Tamrakar from one of the ancient bahals of Kathmandu frequented Tibet and he was in the company of traders frequenting the Kathmandu-Tibet route. That was how, it is believed, he collected coins from different parts of the world.

When he died, they built a stupa for him. Why? Archaeologists involved in the excavation don’t know. They also don’t know why the structure was built so weakly.

But as all objects exhumed was recorded, they came across a stark warning written on the casket.

It said, “Anyone who makes changes to this chaitya will face the wrath of the Ajima and the Bhairav.”

(This is the first piece on the two-part story on the reconstruction of Mangal Bahudwar Chaitra in Swayambhu.) 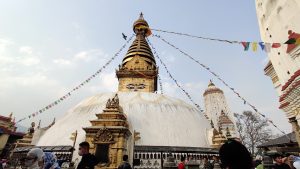