Jeevan Bahadur Shahi of the Nepali Congress has been appointed the chief minister of Karnali. Governor (Province Chief) Govinda Prasad Kalauni appointed Shahi to the position and administered the oath of office and secrecy on Tuesday evening.

Earlier on Monday, Maoist Centre leader Mahendra Bahadur Shahi had resigned from the position to pave the ways for Jeevan Bahadur Shahi to become the new chief minister.

Jeevan Bahadur Shahi had been appointed after 7:30 pm on Tuesday only as the time given by the governor for staking a claim to the position expired that time.

Apparently, Mahendra Bahadur Shahi stepped down abiding by an old gentleman’s agreement between the two parties, as per which they would share the chief minister’s position until the next provincial elections.

The new chief minister was expected to form his cabinet and administer the oath to some of the ministers on Tuesday itself. However, it could not happen as members of the ruling coalition could not finalise the power-sharing deal.

Now, the chief minister looks forward to forming the government by incorporating leaders from the CPN-Maoist Centre, CPN-Unified Socialist and his own Nepali Congress soon. 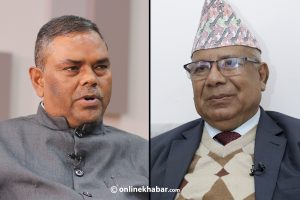