The person who died after getting hit by a bullet was an Indian citizen, informed police.

DIG Suresh Bikram Shah told Onlinekhabar that Suraj Kumar Pandey was an Indian citizen from Badani near Nepal-India border. He operated a tea shop in Kapilvastu according to Shah.

A civilian has died in Krishnanagar in Kapilvastu district after getting hit by a bullet fired by the police on Thursday afternoon. Police had opened fire at the locals who violated the curfew imposed by the local administration following clashes between two religious groups.

The deceased has been identified as Suraj Kumar Pandey.

The local administration had imposed a curfew at Krishnanagar after tension flared between two religious communities. Some police personnel were also injured trying to control the agitating crowd.

The clash had ensured after local Muslims objected to the route taken by a Hindu group to immerse the idol of Goddess Laxmi after Laxmi Puja, according to SP Dipesh Shumsher Rana, chief of the District Police Office. 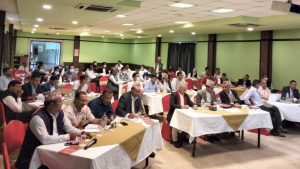